Oysters for The Ark 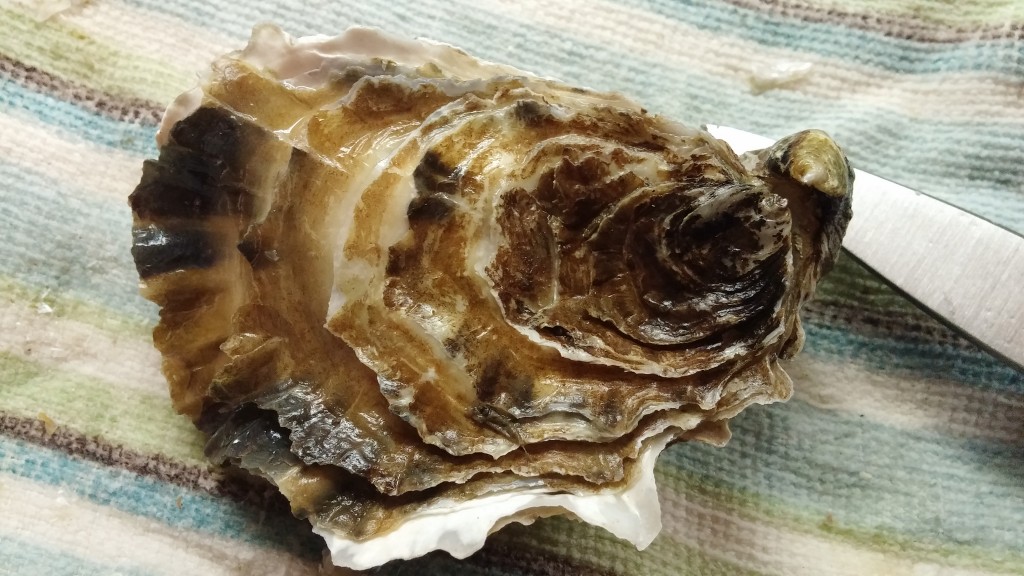 So, first some news. Things have gotten pretty briny around my house, and that’s not just because the Puget Sound is a brief stroll from here. I hadn’t anticipated that my 2014 would wrap up fully engrossed in oysters, but that’s how it played out. By complete coincidence, two Seattle publishers reached out to me about oyster-related projects. The first, an article for Seattle Magazine, appeared in the December issue and covers both the current boom in oyster bars and some of the environmental challenges that are causing anxiety for oysters farmers.

And, Sasquatch Books wondered if I wouldn’t be interested in writing a cookbook on the topic of Northwest oysters, echoing the heightened interest recently in all things oyster. The timing was good for me in terms of considering a new project. And for a number of months now, I’d been moving seafood up the list of priorities for my work time. I still very much relish the years I spent writing and editing at Simply Seafood magazine and in recent years have felt a tug to return to seafood-related projects.

Once the magazine article was done, I immediately turned attention to the cookbook, which will feature recipes cooking oysters in a range of fashions (while acknowledging that the most ardent oyster-lovers want nothing–not even a drizzle of lemon juice–between them and that oyster). But of course there will be some narrative elements as well. I keep falling back on the idea that “context” is a major theme with whatever I write — I don’t think any food topic can be appreciated in a vacuum. Whether it’s a bowl of clam chowder, a luxurious beef Wellington or a perfectly-made Manhattan, background on the ingredients that are used and why, how the recipe came to be, people and places that influenced its development…all that, in my mind, makes enjoying food and drink much more interesting.

So while much of my book work has been in the kitchen creating recipes, I’m also hitting the road to plant my feet on the shoreline in oyster territory and breathe deep of the delicious bivalve’s character and Northwest context. One highlight was a quick hop down the coast to Tomales Bay in California, home of celebrated Hog Island Oysters. What a delicious treat that was.

I was able to kill a couple birds with a late October trip down to Washington’s Long Beach Peninsula. Already on the calendar was a weekend at the Shelburne Inn, where I taught a wild mushroom class based on my new Northwest ebook series, and I joined up with dear friends Charles and Rose Ann Finkel for the beer and wild mushroom dinner that featured their wonderful Pike Brewing products. Wild mushrooms are a gem of a regional product here. But the bigger gem, one that’s been a foundation both economic and gastronomic for 150 years or more, is oysters. The peninsula’s Willapa Bay is among the richest oyster-producing bays on the West Coast. 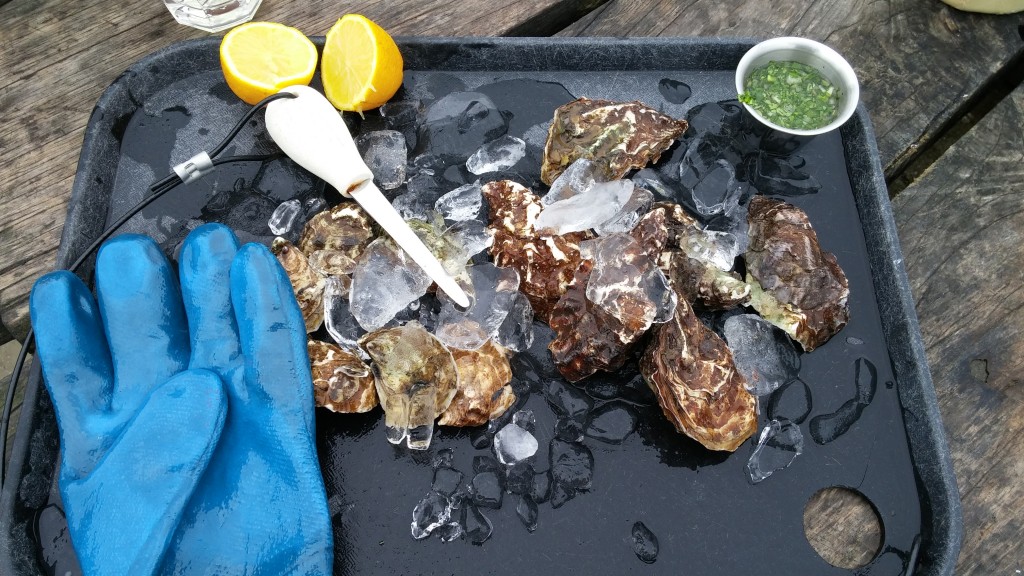 The shuck-em-yourself set-up at Hog Island Oysters in Marshall, California.

For 25 years, The Ark in Nahcotta was a destination for those craving an authentic taste of Northwest cuisine. I’d been for dinner a number of times over the years, one example of which I recounted in my Wild Mushrooms cookbook, having had a grilled halibut and coho salmon dish brimming with sautéed porcini that was divine. We swung by the old place on this recent Long Beach weekend. It was such a blustery, chilly, rain-blowing-sideways kind of day that we didn’t venture out of the car. And it’s probably just as well, I don’t think closer inspection would have been any more enlightening. Closed for a number of years, the restaurant sits vacant and dilapidated.

On the west side of Willapa Bay with mountains of sun-bleached discarded oyster shells nearby, there is little question oysters are a signature experience in these parts. So much so that the bivalves earned their own small chapter in The New Ark Cookbook released in 1990 by owners and chefs Nanci Main and Jimella Lucas. The recipes there include some regional favorites, pan-fried and baked. But one “recipe” stands apart. It’s more of an un-recipe, a friendly culinary challenge that might give any one-time cooking school student who has been faced with a mystery basket practical exam some frissons of anxiety-memory. 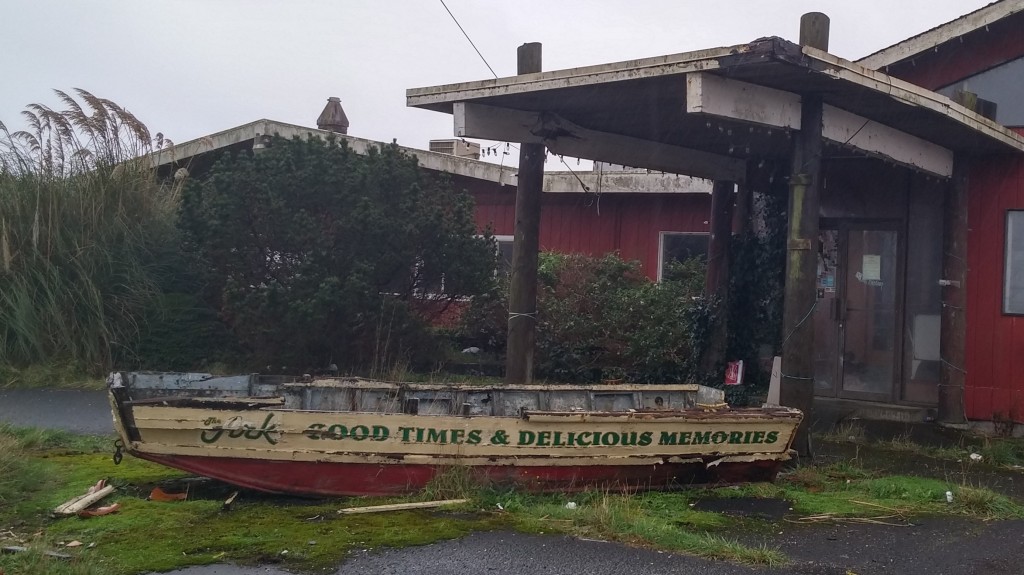 What remains of The Ark, indeed lots of delicious memories.

Called “Just Oysters” in the cookbook, the authors present a list of ingredients and encourage readers to dream up their own preparation. The proposed ingredients are: 3 ripe tomatoes, 4 green onions, a bunch of cilantro, 3 jalapeno chiles, 3 limes, 2 lemons, a small seeded cucumber, 3 cloves garlic, extra virgin olive oil, ground cumin. And the reader is posed these questions: “How would you prepare these ingredients to complement the oysters? that’s your job. What would you name the presentation? let us know.”

So, kitchen warriors and oyster lovers out there among you, what kind of inspiration does that ingredient list give you? How do you imagine you’d put that market basket to good use with outstanding oysters, creating a custom dish that suits your palate and how you like to enjoy oysters? I’d be curious to hear. You’ll see my own interpretation of that challenge in the book when it’s out next winter.