A Matter of Time

I can’t get this thought out of my head since a reader question last week got me pondering recipes and cooking times: clocks don’t know how to cook. I heard from someone who’d seen one of my Salty Snacks

recipes in a local newspaper and questioned the time that had been listed. For Deviled Bacon, it said to cook for 15 minutes per side, her result was too dark and overly crisp. She wondered whether the paper had gotten something wrong.

Having not seen their version of the recipe, it’s hard to say how much they edited it. But as I explained to the reader, the 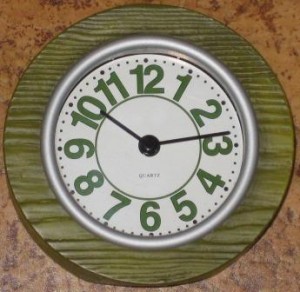 time was generally correct, but with a couple of caveats. I’d listed 12-15 minutes in the book. The bacon was to be thick-cut, thinner strips would cook more quickly. But more importantly, I’d described the goal of the cooking with each step of the process, “until lightly browned on top,” for the first side, and “until nicely glazed, moderately browned and crisp” on the second.

I explained all that to her in an email and she replied saying she had, indeed, redone the recipe with thicker bacon and a bit less time and the results were much better.

It’s been part of my recipe-writing style for as long as I can remember. It’s rare that I’ll address cooking something without a tactile/visual/aroma cue. And I include whatever sensory descriptors before the time, “until tender and translucent, about 10 minutes.” My expectations may be out of whack, but I like to think that those cues taking the lead encourage home cooks to feel more engaged in the outcome, more aware of the process and perhaps become more confident with making decisions as they work their way through recipes.

If your oven temp’s off by 50 degrees or your kitchen’s extra cold or you’re using a different ingredient than intended, the clock’s going to be no help at all when it comes to adjusting necessary time to match your circumstances. Sure, you can raise your fists in frustration — “but the recipe said to bake the crackers for 15 minutes!” Yes, perhaps it did, but FIRST it said to bake them until firm and lightly browned around the edges. The clock doesn’t have capacity to make judgment about the ideal cooking time for your tray of crackers, only you can peek into the oven and see how things are going.

So all this doesn’t alleviate the frustration of hearing from someone that they had problems with one of my recipes. Without standing at the side of every reader and piping up when they’re missing a small detail that can have a big impact, it’s impossible for a cookbook author to ensure 100 percent success.

But I do my best. And if I can get a small percentage of home cooks to get in the habit of the look/smell/touch mode of figuring out when something’s “done,” rather than just setting the timer and walking away — I guess I should consider the job well done. Just hopefully not overdone.