It’s funny how sometimes there’s an odd confluence of input on one topic coming at you from seemingly disparate directions. For me this week, it’s been canning: a subject chatted about at a dinner party Saturday, something Facebook friends gave me lots of guidance about after posting a quick question, and something I did by myself for the very first time yesterday. Then, today, I come across this column by Melissa Clark in the New York Times. Not so much about canning exactly, but about NOT canning. She, like me, is 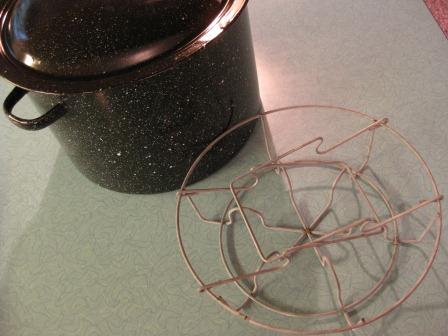 intimidated by canning. Or at least put off by the complexity of the process.

I spent most of my life in the same boat as Ms. Clark. When we first moved into this house over a dozen years ago, this (right) was in the basement.

Honestly, I didn’t know for sure what it was at first, but eventually figured out it was a pot and rack for canning. The house has a spare stove (original to the 1950s era of our house, I’m pretty sure) in the basement, with a couple small shelves above it and a utilitarian long counter off to the side. It’s pretty clear the longtime owner of this house had been a canner. “How quaint,” I thought. Having not grown up at the elbow of any canners in my family circle, I had no affinity for, nor interest in, canning. Not just that, the process pretty much petrified me. All those critical steps of preparation, getting the jars sterilized, prepping the lids, temp control, perfecting the seal, etc. And I was overwhelmed by the idea that without proper attention to levels of temperature and acidity and other mystical attributes of the canning process, it was just a ripe opportunity to create a festering lovely glistening jar of potentially fatal food. I just could not get that concept out of my head and never once gave canning a consideration. 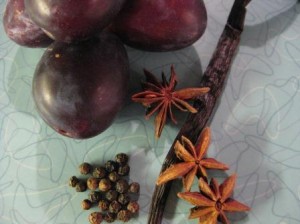 But a few things have conspired recently to start breaking down my anti-canning resolve. For one, friends and colleagues were big players in the recent renaissance of the canning bandwagon, if not actually driving some of the momentum — such as Kim O’Donnell who founded Canning Across America. I’d get invited to join for a Saturday of putting up tomatoes or a weekend jam session making the most of an overabundance of berries. I just couldn’t muster the enthusiasm to join them until a weekend this summer when they took the “canvolution” on the road to Lummi Island–a field trip, I could get enthusiastic about! A handful of us spent a long and busy Saturday pitting cherries, stirring pots of bubbling blueberries, packing jars with seasonings for  pickles, carefully simmering and checking lids and making room for the next batch to roll through production. We came home with blueberry jam, cherry shrub, cherry ketchup and pickles. I learned first-hand many of the steps and techniques of canning and picked up some of the ease of the process from these practiced canners.

Still. Wasn’t sure it was for me.

Then, this past weekend, I was unexpectedly gifted with a good 10 pounds or more of plums. Not once, but twice. Came home from  a 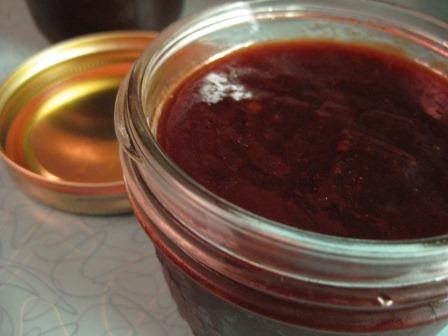 dinner Saturday night with LOADS of plums from my cousin’s tree, then friends we met for brunch the next day happened to show up with more from their yard as well. These were both Italian prune-plum types, with the bluish-purple skin and amber sweet flesh. My favorite kind! I wanted to be opportunistic. Not just freeze them all to think about later, instead have some fun with this serendipitous supply.

. I’d never really had plum butter before, but am a huge fan of apple butter and figured plum would make a tasty twist. So I made up a batch (with tweaks, of course, I’m chronically unable to follow someone else’s recipe to the letter, my version’s below) and quickly realized it made more than I’d be able to enjoy saved just in refrigerated form. So I stood there in the middle of the kitchen and told myself “I’m going to do it. I’m going to can some of this stuff.”

Off to the store for some jars. Up from the basement with the canning pot and rack. Did my bits of mise en place to get ready. Next thing you know, there I was, lifting a hot jar from simmering water, pouring in the hot ruby-colored plum mixture, topping it with a gently warmed lid and screwing on the ring — just to “finger tight” as I’d learned from my canning pals.

Now that I think a little more pragmatically about the process, it’s not much different from following any recipe. And I’ll tackle pretty much anything in the kitchen without any qualms. So I chilled out a bit about all my apprehensions and just followed the prescribed steps. This “getting started” part of the site from the Ball jar company was helpful with good basic overview but there are so many great resources these days.

I’m about to take out a sharpie pen and note the contents on the lids of those few half-pints in the other room here shortly. Who knows, maybe it was destiny, the ghost of our home’s original owner nudging me gently over the years. But I guess I’m now officially a canner. And there may be no turning back. In fact a flat of nectarines in the kitchen is calling my name…..

Spiced Plum Butter
adapted from a recipe from The Gourmet Cookbook, Ruth Reichl

As a still-learning canner myself, I advise that if you need pointers on the important details of the canning process you to refer to a reliable resource such as Ball jar’s canning site, the USDA canning guide or your local cooperative extension office’s canning information.

Combine the plums, sugars, lemon juice, star anise, cardamom and black pepper in a large, heavy pot. Set the halved vanilla bean on the work surface and run the tip of a small knife down the length of each half to remove the tiny dark seeds. Add both the seeds and the bean halves to the pot. Stir to mix the ingredients, then set over medium heat and bring slowly to a boil, stirring occasionally. Boil, still over medium heat, until the fruit is quite tender, about 5 minutes. Set the pot aside to cool completely, which also allows the flavors of the spices to infuse the fruit.

Lift out and discard the star anise and vanilla bean halves. Pass the plums and their cooking liquid through a food mill set over a large 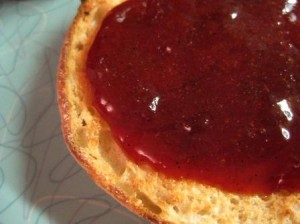 bowl (I used my food mill’s finest disc for a really smooth texture). Be sure to scrape all the delicious puree from the underside of the food mill’s disc, then put the plum mixture into a medium, heavy saucepan. Set over medium heat to slowly bring to a boil then cook, stirring often, until the mixture has reduced and thickened enough that a dollop set on a small chilled plate holds its shape after 1 minute in the refrigerator; when you tip the plate it shouldn’t run. It may take a good hour of slow cooking to get to this point; I used a heat-proof rubber spatula for the stirring, sure to draw it fully across the bottom and sides of the pan to avoid sticking and burning.

Prepare canning jars and lids (see headnote) for canning. Fill the heated jars with the hot plum butter mixture to within about 1/4 inch of the top of the jar. Top each jar with a warmed lid and gently screw on the lid ring. Seal, process and cool the jars, boiling the jars for 10 minutes’ processing time.

I got about 5 half-pints of plum butter; note that any partial jar at the end should NOT be heat-sealed, instead simply top with the lid and refrigerate, enjoying this jar first.