Okay, enough with the stone fruits! I’ve clearly been on a bent about that category of delicious summertime fruits. For a moment I’ll move along from the peach and plum tones of those juicy treats and give some props to the jeweltone berries. 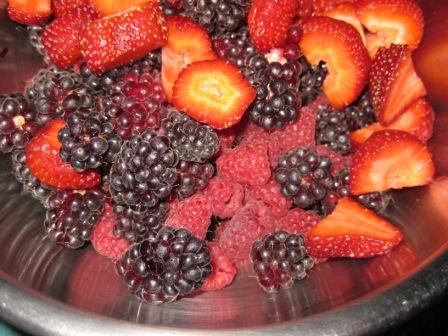 A few occurrences conspired to put visions of summer pudding dancing in my head over the past few weeks. Random conversations. Memories. What-to-do-with-those-beautiful-berries ponderings. The last straw was when I came across this recipe in Relish magazine a couple of weeks ago. That did it. Summer pudding it would be. Friends coming over for dinner a couple nights later were to be the victims.

I first learned about summer pudding about 20 years ago. At the time I was living in France, working on various book projects with Anne Willan after having graduated from La Varenne. One interesting project had me going over to England with Chef Claude to do some video work, done at the English countryside home of one of the project’s producers. Beautiful setting, warm and gracious people, quiet environs. It was a wonderful few days. A highlight of which was a small dinner party our hosts threw while we were there. The time was late summer, I can still picture the cozy, colorful dining room and lively ambiance of conversations that evening.

Not every detail of the meal remains in my memory bank, but I was introduced to two things that night: sea beans and summer pudding. Sea beans (also known as samphire, among a number of nicknames) will have to wait for another day. But that summer pudding was a revelation: bright and bursting with flavor, despite being made with little more than berries, sugar and bread. 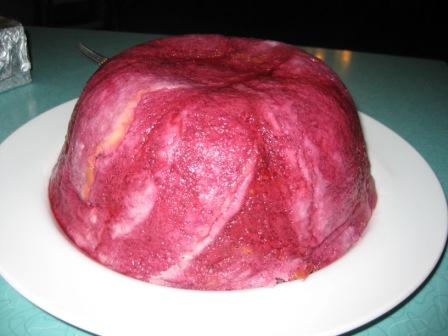 Off I went to the grocery store, my wonderful neighborhood West Seattle Thriftway that feeds me so well. This time of year they have a special rack in the produce area, featuring berries from Sakuma Brothers up in the Skagit Valley. Sure, expensive when you compare the price berry-for-berry against the standard offerings. But worth every cent given the mountains of flavor and aroma they offer by comparison. A quart of strawberries, a pint each of blackberries, raspberries, blueberries, boysenberries.

Though I always knew summer pudding to be made with everyday white bread–a type with dense crumb and not too soft–I wanted to make mine with brioche for a bit of extra panache, as did chef Ashton in that Relish recipe. There’s a good selection of Macrina breads at my Thriftway but that day the brioche loaf came only in raisined form. Not for summer pudding. So I made perhaps an odd choice and went with Macrina’s brioche hot dog buns. Same product, different shape. Just meant a bit more creative shape-cutting to fully line the bowl.

I didn’t follow the recipe exactly, as is my habit. I used less water, maybe 1/2 cup. I didn’t strain the berry juice from the berries to then dunk the bread pieces in the juice. Seemed an unnecessary step to me, dirtying more tools, when the bread is going to have ample time to soak up all that juice once the pudding is assembled.

So there I was, lining a ceramic bowl with my oddball shapes of brioche buns. I cut off most of the crust and cut the buns in long slices to best replicate normal sliced bread. Gently cooked the berries a bit, then ladled them and their vivid juices into the bowl. More brioche on top. Then the perfectly-sized plate to perch on top, with a heavy can or two to weigh everything down while it chills for a good 8 hours. 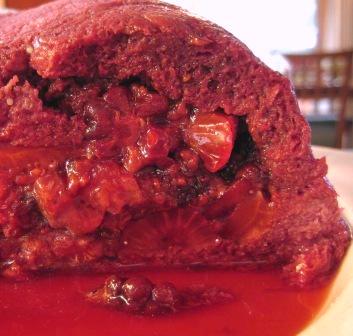 It’s pretty phenomenal how much that loose, juicy berry mixture sets up over time. Thankfully, the plastic wrap used to line the bowl gives you some leverage to help neatly dislodge the pudding onto a serving plate. A friend with Anglo heritage swears Devonshire cream is the only ideal accompaniment to a “summer pud” but all I could muster up was some freshly whipped and just lightly sweetened cream.

Perfection. A great way to cap off dinner with a longtime friend passing through town with his two bright, precocious children. And it wasn’t bad for breakfast the next day, either.