This morning’s breakfast was a particularly good eye-opener, a nice change of pace from my standard fare (english muffin with peanut butter, yogurt with Grape Nuts, bowl of cereal). Today, I slipped a piece of cornbread from the pan in which I’d baked it yesterday. I cut the piece in half and toasted it for a few minutes under the broiler. The tiniest 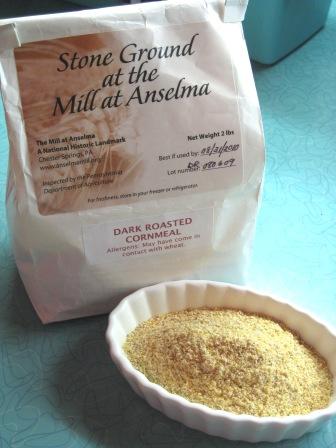 swipe of butter, a nice spread of some homemade Meyer lemon marmalade that a friend made. Peppered with occasional sips of reviving coffee, it was a delightful breakfast. One I’ll repeat as long as that pan of cornbread holds out.

I’d been looking at that bag of cornmeal on my kitchen cupboard for a couple of months now, the one I brought home from my October trip to Philadelphia. Visiting friends in nearby Chester County before hitting the city had included a quick trip to The Mill at Anselma, a historic site that has been grinding grains for over 250 years. I bought a bag of their cornmeal in the “dark roasted” style, intrigued by a product I’d never used before. The Pennsylvania-grown corn is milled, the grains toasted before packing. Even while I was stirring the batter, the distinctive nutty aroma of the cornmeal was easy to notice. Even more so when the pan of golden bread came from the oven, smelling as much like a hazelnut cake as a cornbread. I haven’t done much snooping for it around the Seattle area, so have no idea if dark roasted cornmeal is available from other sources. But the gift shop where I bought the cornmeal at the mill will mail products as well, ordered over the phone.

The recipe I used for inspiration in making the cornbread yesterday was from James Beard. His American Cookery

book (this link’s to a newer paperback release, I have the old hardback version) is a favorite go-to reference for old-school Americana recipes and ideas. In that book he says “The finest corn bread I have ever eaten came from the recipe of the late Jeanne Owen, who was a brilliant cook and a stalwart disciple of the art of good living. Mrs. Owen often served it for cocktails in the form of small square sandwiches filled with bits of ham.” 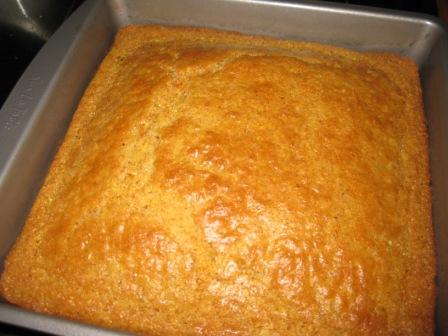 I had to make a few amendments. I’m not much of a baker, to the degree that it takes forever for me to go through a tin of baking powder. Until yesterday. Scattered across the bottom of the tin was only about half of what the recipe called for. I supplemented with baking soda, but know that it really needs a bit of acid to rev up (thus the buttermilk often called for in recipes with baking soda). No buttermilk in the fridge, so I added a couple doses of red wine vinegar to the milk. Not, perhaps, an ideal work-around, but it really did the job yesterday. I guess this recipe ended up being not only a study in how that dark roasted cornmeal tastes, but also one in ingredient replacement! You’ll see other notes about my alterations in the recipe below.

1/4 cup cream [I didn’t have any cream, used extra milk instead]

1/3 cup melted butter [I used 1/2 cup, to replace some of milkfat that would have been in cream] 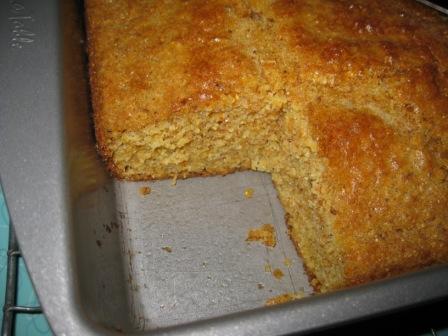 Sift all the dry ingredients together in a mixing bowl. Add the eggs and milk and beat with a wooden spoon. Beat in the cream, and lastly the melted butter. Pour into an 8 1/2 x 11-inch well-buttered pan [I used a 9-inch square pan, worked fine] and bake at 400 degrees approximately 15 to 18 minutes. Cut in square while still hot and fold into a napkin before serving.