I’ve had a Blondie comic strip tacked just above my desk for a while now. In it, Dagwood’s playing poker with his pals, shuffling the cards only to have them all fly out of his hands with a P-R-R-R-T (one of those clever comic sound effects). The others decide that Dagwood’s not allowed to shuffle the cards with those greasy-pizza fingers of his ever again. 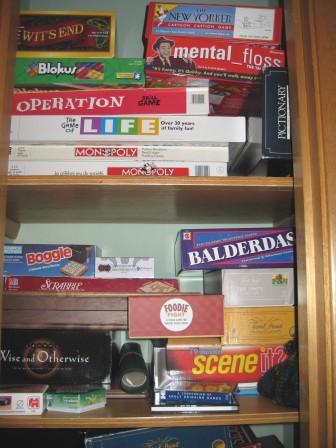 Games are big in this house. The photo here is just a couple shelves of our “game closet,” where most other people would keep their towels and linens. Before seeing that Blondie strip, the germ of an idea for a cookbook full of game-friendly foods had already planted itself in my head. An idea that the strip’s sentiment perfectly echoed. The recipes would feature items that don’t require you putting down your cards to pick up a knife and fork. Plates that won’t take up so much table space that the dinner is competing with the dominoes. Foods that won’t leave traces of sauce or juice or oiliness on your fingers, so you can go about sculpting Cranium

The date on that comic strip? May 2, 2002. It’s an idea that’s been growing and developing for a number of years now, finally in full gear. I’m deep into testing and writing of my latest project, Game Night Food, which will be published by Ten Speed Press early next year (the same folks who published the lovely Rover’s cookbook

I co-wrote with chef Thierry Rautureau a few years ago).

I  love a lot about my work as a food writer. Okay, not so much the endless hours in front of the computer screen taxing my story-telling skills in crafting an article or essay or other narrative exercise. That’s still hard, though rewarding when it’s all done and submitted.

But what I really love is sitting at my computer and dreaming up recipes, 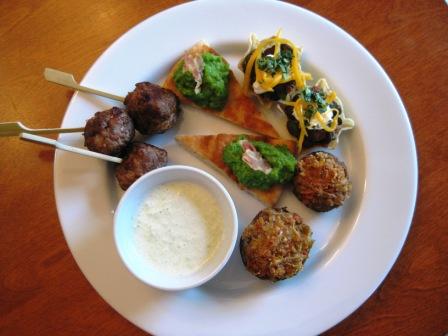 then going into my kitchen to test, hone, polish and develop into a delicious, relatively fail-safe candidate for a project such as this. With, in this case, the added creative challenge of preparations and presentations that fulfill the ultimate goal of the book: a game night dinner party that isn’t about having dinner then playing games, but an evening in which dinner and games intermingle perfectly.

What I really, really love is that this book is truly fun and games. Not only is cooking and creating the recipes enjoyable in itself — for this project I’m putting the recipes through real-world rigors as much as possible. Which means gathering friends and family around the table often for work-meets-play Game Nights, to sample the recipes and offer their feedback, while also confirming that they’re game-friendly, tidy and ultimately satisfying as I hope they will be. So far not too many duds thankfully. Some early favorites include mini

I’ll surely be sharing a few more details with you as the project progresses. But in the meantime, do you have any favorite game night stories or scenarios you’d like to share? A great new game you can recommend (my editor turned me on to The New Yorker Cartoon Caption Game

, which is a hoot), or a longtime family favorite that never fails to entertain and help you unwind with your friends? Bring on the fun. And may all your game nights be delicious ones!