It was going to be a busy couple of days this past weekend and I was determined to not try to do it all myself. Our annual summer party sees a good crowd come to the house, but I’m also in prime training for the Breast Cancer 3-Day in a month’s time, so couldn’t give up my 16-mile Saturday training walk to cook for that night’s party. I planned to prep a bunch of salads, desserts, dips, etc. on Friday, simply grill salmon Saturday and buy a load of pulled pork from a local barbecue joint for mini sandwiches to round out the menu.

Then I got a wild hare and decided to make the pulled pork myself. Spurred in part by having found great looking pork shoulder (aka pork butt) at Costco, and for a steal (about $15 for nearly 11 pounds). 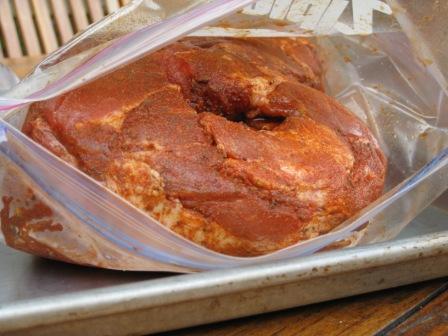 Just before going on the grill

Never having attempted a serious pulled pork endeavor before, I turned to a favorite barbecue source: Steven Raichlen. The pulled pork recipe in his wonderful The Barbecue! Bible

cookbook takes some tips from his bbq colleague with North Carolina roots, Elizabeth Karmel. The recipe is also available here in online form. I (almost) religiously followed the recipe and man-oh-man the results were delicious. Friends raved. I’d make that again in a heartbeat. When I have a couple of days and a whole slew of people to cook for. 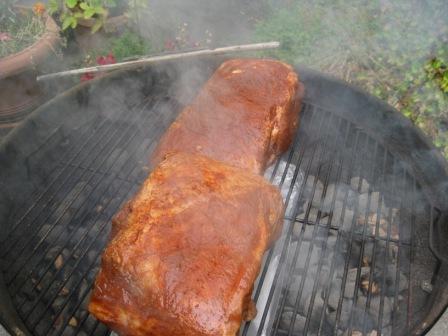 One minute down, about six hours to go

I amended the dry rub a bit, based on what I had on hand, using sweet and smoked paprika, celery seed, garlic powder, onion powder, ground white pepper, cayenne, dry mustard, brown sugar and salt. And I made quite a bit more than the recipe recommends, since I had about 11 pounds of boneless meat (in two portions) to cover. Because they were pretty big, I also seasoned them a full day before barbecuing.

Next day, I set up the beloved classic Weber kettle grill for some indirect cooking action, shoving the hot coals into two sections at opposite sides of 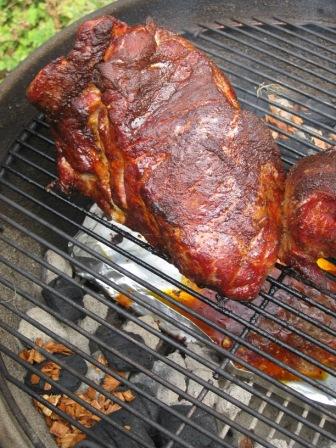 About halfway there, adding more coals and chips

the grill. I knew I had some smoking chips in the garage, ends up they were alder instead of hickory, guess that just added a touch of Northwest flair to this otherwise North Carolina recipe! By the way, whoever devised those flip-up flaps on the grill grate to make adding more chips and coals later…genius! Made a tray out of double-thickness foil; given how much dripped off the meat in the ensuing hours, that is definitely NOT a step to skip!

On went the meat at about 1:45 in the afternoon. The key, according to Steven via Elizabeth, is cooking to 195 degrees interior temp. One hunk of the pork was ready at about 7:30, the other about 45 minutes later. I’d added more coals and more chips 3 or 4 times while they’d been cooking. I transferred the beautiful, juicy, aromatic pieces of pork deliciousness to a baking sheet covered with foil to cool for a hour or so, then on with the plastic gloves and on with the pulling, discarding excess fat and any hyper-charred bits along the way. Wow, that pork was just perfect! Some of it so tender I 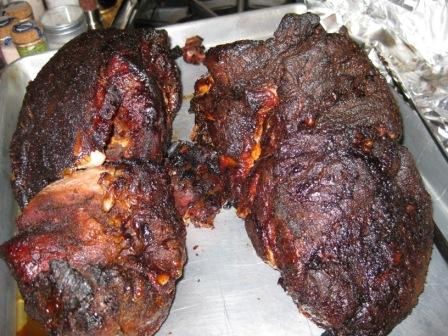 Fresh from the grill, ready to rest

swear you coulda fed it to an infant….. I did my best to snag just a few little bites along the way. Done “pulling” around 10:00 that night. But every step of the way it was worth it.

A simple vinegar sauce was tossed over the meat–cider vinegar, ketchup, salt, pepper, cayenne, just a touch of brown sugar (I personally don’t like ‘sweet’ in my meat, ketchup seemed already sweet enough to me). Then into the fridge for the night,  reheated the next evening as friends started arriving.

I’m sorry to not have a picture of the full spread, but alongside was a salad of 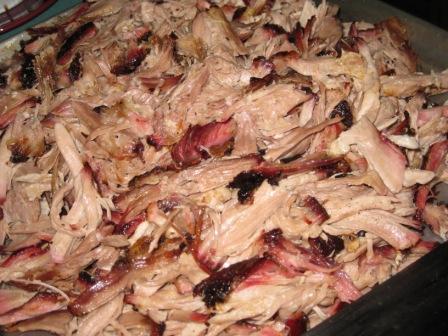 One delicious mess of pulled pork