This is a simple little technique that I picked up somewhere in the course of my culinary development a couple of decades ago. I have a feeling it morphed out of having had that peler Ã  vif  technique drummed into us at cooking school (a technique I use pretty often, as it happens). That link’s in French but you easily get the idea. The one thing the video doesn’t show is taking out the individual orange sections. Just slide the knife blade between the flesh and membrane of one section, and again on the other side of the same section, so that the little wedge of orange flesh just slips right out. Work over a bowl to catch the section, and the juice. Keep going around the orange in the same fashion, folding back the membrane flaps like the page of a book to keep them out of the way. A great addition to a salad, maybe with spiced 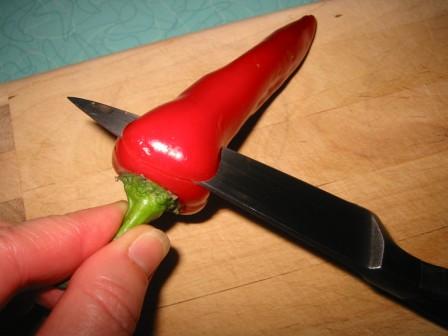 walnuts and blue cheese? And the orange juice can be used in the vinaigrette as well. Delish.

So, back to this chile version of the technique. Adapted to bell peppers and other chiles, it works pretty well,  though with the reverse goal. On the citrus fruits, the idea’s to get at the pure core of the fruit without any peel or pith. For the chile family, it makes quick work of removing the crisp, delicious outer flesh, so the core and seeds remain intact for easy 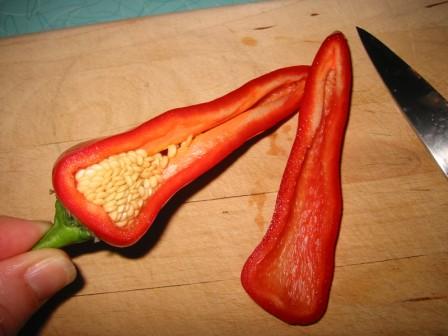 Simply use a small, sharp knife to cut away a strip of flesh from the core end to the tip. Depending on the shape of the chile, you may need to make the cut at a slight outward curve–rather than straight down–to avoid the bundle of seeds attached to the core. (This is particularly true with rounder bell peppers. My sample chile here is a red jalapeÃ±o.)

Turn the chile a bit, and repeat a few more times until you’re left with the 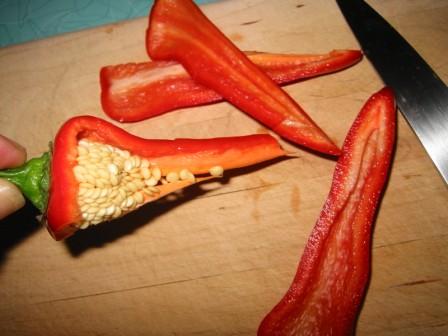 stem/core/seed portion and strips of flesh ready to use.

I also use this technique on tomatoes, for recipes where the goal is tidy strips or dice of tomato without extraneous seeds and pulp. If you have a batch of tomato sauce or a stew in your near future, you can always save the tomato pulp for that. 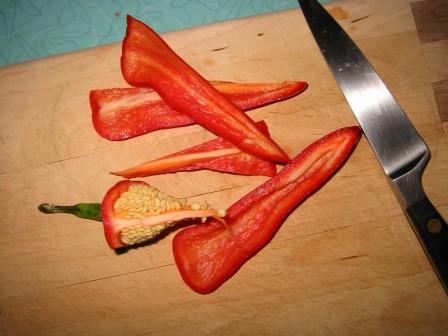