“Come over for dinner tomorrow night, why don’t you?” I asked a friend Friday. “Sure, sounds great. I’ll bring the wine, I was recently at a tasting of Portuguese wines and have a couple of bottles to share,” she tells me.

My plan for dinner had been simply to follow whatever random inspirations hit as I made a tour of the market–which is the way I approach any dinner party that has no predetermined focus. When I’m cooking for fun, it’s all about going freestyle. I spend many of my work days meticulously testing recipes, noting every extra teaspoon of this, every 5 minutes more time needed, every shift in oven temperature. I spend as much time editing 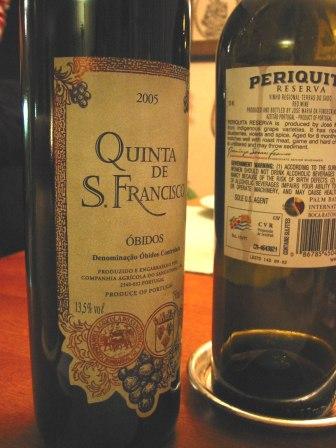 recipes over and over again, a sometimes eye-glazing task making sure steps are clear and accurate, phrasings are consistent, no ‘i’ remains undotted. When that work switch goes into “off” mode, I run in the other direction and get my giggles from unscripted cooking.

But Portuguese. That’s not a cuisine I have much inherent comfort with. I think about seafood, pork, …., port? Not enough to inspire a whole menu. So I turned to my ever-trusty Foods of the World Time-Life series, and the Spain and Portugal book set me on my way.

Yes, I kind of broke my own off-hours rule: I referred to some recipes. But just for ideas. It’s almost impossible for me to really follow a recipe by the letter when I don’t have to!

Our first course was a soup, based on a garlic soup recipe I’d read. I started with finely minced onion and lots of minced garlic nicely sautéed in olive oil (not just tender, but lightly browned). I added 4 cups good organic chicken broth, 1 drained/rinsed can of chickpeas and a splash of white vermouth. While that was happily simmering away, I plucked a generous handful of mint leaves from their sprigs and blended them in the food processor with a good drizzle of olive oil until smooth. When serving the soup, I added a spoonful of the mint oil, which perked up the  simple soup wonderfully. 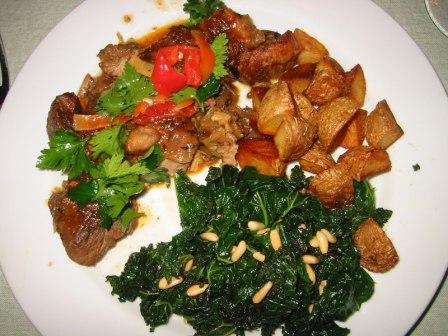 I came across a number of pork recipes, often braised. I opted for a simple concoction that began with large-cubed pork butt, first well browned in olive oil. Out comes the pork, in goes a chopped big onion and (again!) lots of chopped garlic. Sautéed until partly tender, then I added a good dose of pimentÃ³n de la vera (smoked paprika), some thyme and good pinches of salt and pepper. I added a couple cups of chicken broth, on went the lid and into a 275 degree oven for nearly 4 hours.

Preferring to serve this not in a stewy fashion, I scooped out all  the meat and reduced the cooking liquids a bit, keeping the meat warm (covered with foil) in a low oven. Parsley was meant to go in the soup too, but I wanted the mint to shine there, so saved it for the main dish.  To cap off this dish, I combined a small handful of flat-leaf parsley leaves with a couple spoonfuls of Mama Lil’s pickled peppers. No, they’re not Portuguese. Made in the Seattle area with beautiful peppers from Eastern Washington. But I love those things and felt they were in the spirit of Portuguese cuisine! Spooned on top of the tender, aromatic braised pork, the parsley/pepper combo made for a perfect fresh, bright complement. (Braised Pork Ã  la Portuguese with Paprika, Parsley and Pickled Peppers. Try saying that 10 times fast!)

To accompany, I served simple sautéed kale, embellished with toasted pine nuts and a sprinkle of lemon juice just before serving. And sautéed potatoes (delicious bintje potatoes I’d bought at the farmers market that afternoon) tossed with more pimentÃ³n de la vera. It all combined into a great main-course medley.

For dessert, I found a porto pudim flan recipe that was beautifully straight-forward. But of course I had to make some alterations! For starters, I heated 3/4 cup each of milk and heavy cream  in a saucepan. Same time, sugar (I 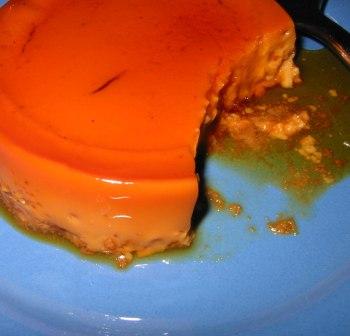 used about 1/2 cup) was caramelizing in a separate pan. I poured some of the deeply colored caramel into the bottom of 4 ramekins. Then I carefully poured the warm milk/cream mixture into the rest of the caramel, stirring until the caramel is fully dissolved.

In a medium bowl, I whisked 3 egg yolks for a minute or so, then added the warm caramel-milk (start with a small drizzle to temper the egg yolks, warming them gently to avoid cooking them). The custard went into the ramekins, then the ramekins into a baking dish. I poured some boiling water into the baking dish and the custard baked at 350 degrees for 40 minutes or so, until set. (I’d probably cook them at a gentler 300 degrees for a bit longer next time.) After they were cooled to room temperature, I covered the ramekins with plastic and refrigerated to fully chill. Nothing better than a dessert that takes just a moment to unmold after dinner!

So, my “hey let’s have dinner together tomorrow night” became a little more involved than I’d initially imagined. But boy, did I have fun. Exactly my kind of busman’s holiday, cooking up a storm but just for the pleasure of the moment. And not one little note written down. Just this recounting for you. Sometimes the emphemeral meals are the best.