There’s no better way to get a message across than to make it personal. Which is exactly what the folks from Long Live the Kings are doing with their second annual Survive the Sound campaign, engaging the public to follow the spring migration of 48 steelhead heading up the Puget Sound toward the ocean.

Long Live the Kings has, for over 30 years, been devoted to the task of restoring wild salmon and steelhead in the Pacific Northwest. With this recent brainchild, they’re not only alerting the public to the challenges local fish populations face, but getting them on board to actively root for fish to survive the trip from their natal river–the 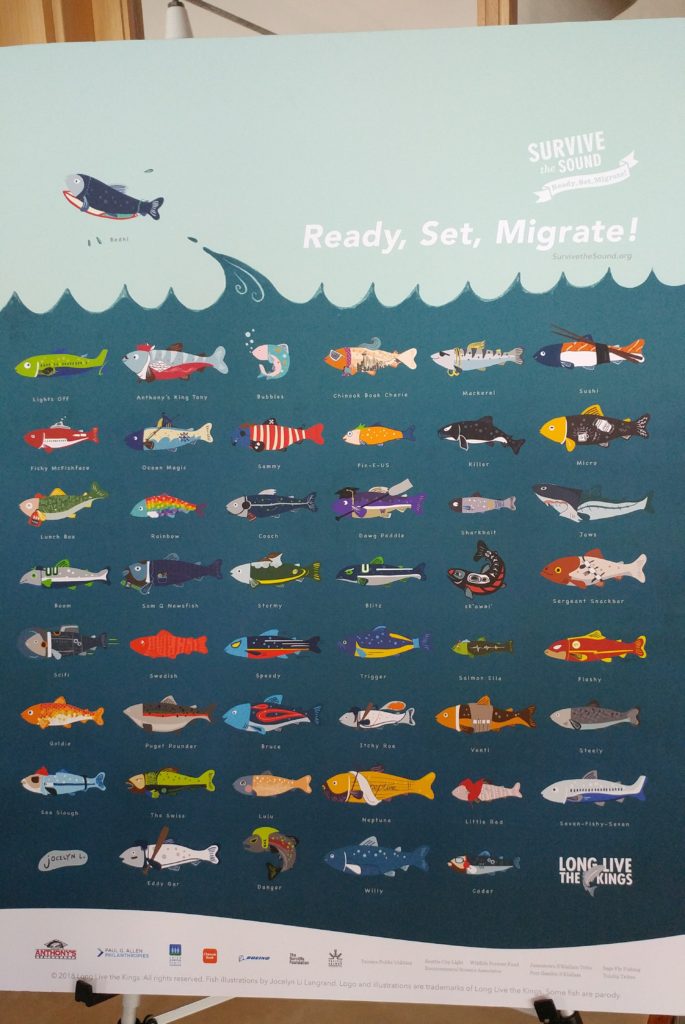 Skokomish or Nisqually, in this case–to a finish line near the mouth of the Strait of Juan de Fuca heading into the Pacific.

Forty-eight juvenile steelhead have been tagged and will be released to join spring migration on May 7, their progress monitored by acoustic receivers throughout the Puget Sound. Once underway, their status (if still alive, whereabouts, distance traveled) will be updated daily on the web site. Each has been cleverly named–Itchy Roe, Seven-Fishy-Seven, Dawg Paddle and Sushi, among them–with a colorful persona and data about how large the juvenile is and from which river it will be joining the cross-Sound trek. The web site spells out ways to join the fun: supporting a specific fish, joining a team, or starting your own team. Among the teams are companies supporting the campaign (including Anthony’s Restaurants and Paul G Allen Philanthropies), groups of colleagues (there’s a friendly competition between a 737 and 787 team, in the lead, respectively, when I wrote this), school classes and lots of general public.

Trick is, the deadline’s May 6 to get in the game–the day before the Survive the Sound action gets underway. Don’t dawdle. And here’s to many winners among those 48 fish, fighting the odds to get out to the ocean. We’re along for the ride, cheering them on.