I think a new tactic I’ll employ whenever travelling to a new place for the first time will be getting a pedicure on the first day there. That’s how we found out about the secret location for getting our shrimp fix while in South Carolina last month. Warm weather, beaches, sandals, sunshine meant a prime time for getting our toes all primped up. So Sunday morning we were hanging out at the local mani/pedi 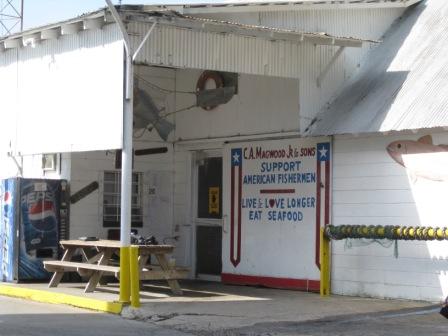 destination, in one of the fancy outdoor mall areas of Mt Pleasant just outside Charleston. Piggly Wiggly in the same complex became a frequent stop, this mall quickly became part of our routine during our brief stint as locals.

So there we were soaking our toes and four women were just finishing up, sounded like prelude to wedding celebrations later in the week. We exchanged a couple quick hellos. I guess it was pretty clear we weren’t from around there (lily white skin a dead give-away I suppose), they asked where we were visiting from. Our new friend heard “Seattle” and immediately asked if we’d come to town for Bambi’s party. Or maybe it was Buffy, or Trixie? Whatever it was, it wasn’t a name I hear often attached to any Seattleites I know. We nodded ‘nope’ but secretly wondered about crashing a fellow native’s shin-dig down there in South Carolina….. But then down to business. “Where can we get some local shrimp in the area?” we asked. Shem Creek, 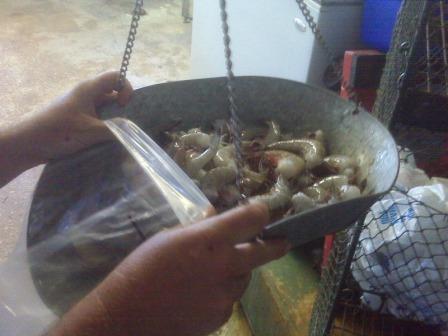 she told us. She explained that’s the area where all the shrimp boats pull in and dock when they’re not out shrimping. “Get your shrimp at Wendy’s,” she said. “It’s right behind the Rack.” Shem. Wendy’s. Rack. Got it.

Kathy and I headed back to the house to dazzle our husbands with our twinkly fingers and toes, then we all head off for our first of two lunches at Poe’s Tavern. We’d be regulars in a heartbeat if we lived anywhere near here. And we will be every time we make a return visit. Then off in search of shrimp. Took a while, but we had nothing but time (ahhhhhhh, vacation!). Google maps messed us up a bit, sending us to a hospital complex just off the highway. Only off by about four miles…… We finally found Shem Creek Inn, which lead us to some shrimp boats, a quick chat with a cook at a tourist restaurant who was catching a smoke out back, and before long we were standing in front of a funky local restaurant called The Wreck (not the Rack), with Wando Shrimp (not Wendy’s) alongside.

Both The Wreck and Wando were closed, but still we’d struck pay dirt. Because to the other side of The Wreck was 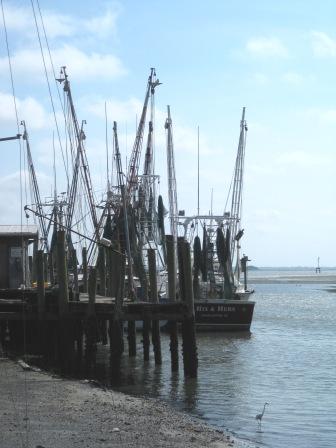 Magwood & Sons. Purveyors of shrimp. Though they were out that afternoon. We chatted with head honcho Jay, who promised to call when next the boat came in. Which he did on Tuesday, very early in the morning. A few hours later, we were standing in the shop and he was scooping up 5 pounds of just-landed shrimp from the bin. While we were standing there chatting with Jay, I realized we’d come in the back door and were standing in the business part of the business, while most customers come in the other door and order at the counter. I sheepishly apologized, he said “that’s okay, I know you guys,” like we were longtime friends. Gotta love that about the South! As he was filling the old-school scale hanging from the ceiling, I scanned the shop noticing not much else going one. Shining stainless steel tables for cleaning. Refrigeration. The big tub full of shrimp. “Do you sell anything besides shrimp?” I asked him. “You bet!” he said. “Ice.”

Back to the house with the shrimp. As good fortune would have it, Tuesday is also farmers market day in Mt. Pleasant, but not until later in the afternoon. First, we had an early afternoon date with Nathalie Dupree at her really charming historic home in downtown Charleston, talking about food and 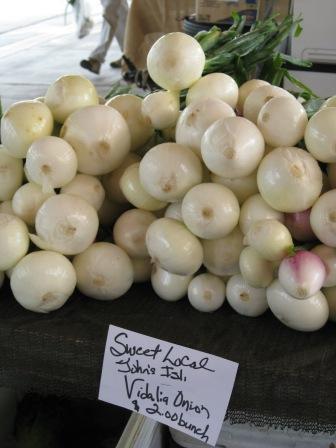 cooking and Charleston and her work telling the story of Southern cuisine for a number of years. Great fun. And it’s where we learned the wisdom of “you can’t catch a pig from a horse,” which came in the course of discussing barbecue. And why it’s pig barbecue in the Carolinas and beef barbecue in Texas. Cowboys like to be on horses, galloping around and whooping and roping things. Cows are much more amenable to that scenario than are pigs. Which I guess explains why they’re not called Pigboys. But I digress.

Back over the lovely Arthur Ravenel bridge spanning the Cooper River to Mount Pleasant (a quick 10-15 minute drive) and the farmers market. It’s run by the city of Mt. Pleasant in a lovely, new-looking permanent structure. Lively and dynamic, lots of lovely produce, great locally made products like pickles and cheese, peanuts fresh, boiled and deep-fried (you eat them shell and all!). It was a fun and delightful taste of the region, and a great way to stock up for dinner. 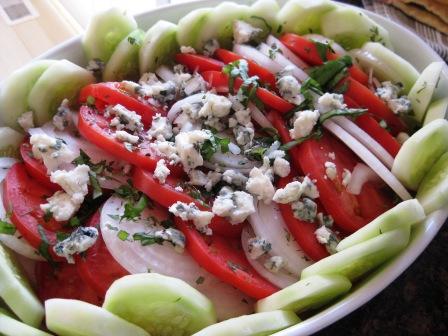 The kitchen was soon a-flurry with activity. Green beans being trimmed, garlic cloves peeled, tomatoes and sweet onions sliced, ears of corn being shucked, amazing little creamer potatoes being scrubbed. Cocktails being made. Pimiento cheese being snacked on. All we were missing was the soundtrack from Big Chill. It had already been a wonderful day, and we were in for a pretty spectacular evening. 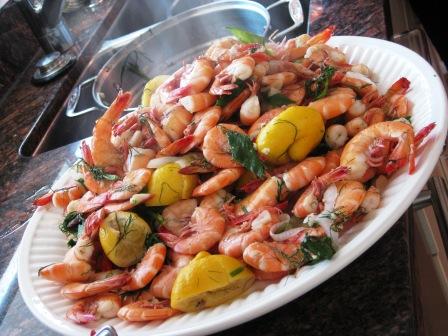 As is true of most regional/seasonal food, it’s usually time to stand back and apply the “less is more” principle. So the shrimp just got steamed very simply with sliced garlic, the green tops from the onions, herbs from Nathalie’s garden, lemon halves. Our salad was simple sliced cucumber, tomatoes, sweet onions with blue cheese scattered over and a balsamic vinaigrette. Corn, green beans and potatoes simply steamed. OOOOHHHH. And how could I forget?!?! Garlic bread! Old-school. Lots of butter with lots of minced garlic, some chives and other herbs. Slathered on big slabs of “French bread” (you know the kind, softer big loaves than any classic baguette). We were in HEAVEN. 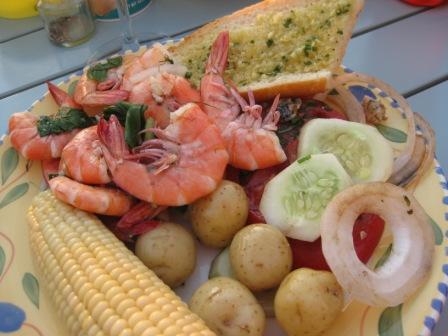 Everything was ready. We piled onto the deck, had a good hour or so of sunlight left, glasses filled with chilled beverages of choice. All was right with our world! And it was an amazing dinner. Lots of moans and groans, more than a few comments akin to “a meal to remember.” A blessed highlight of vacation!

The leftovers were pretty remarkable too. Yes, we’d bought TOO MUCH shrimp. So it got peeled after dinner and tucked away for tomorrow. All the shrimp shells went into a pot and simmered for the rest of the evening. And it was a long evening of playing games and sipping cocktails (Kathy invented the Charleston 75 in honor of the experience!!! Ooooh those were good). So those shrimp shells had ample opportunity to exude all their wonderful flavor into the water. Which after being strained, we reduced even further to a thick near-glaze. 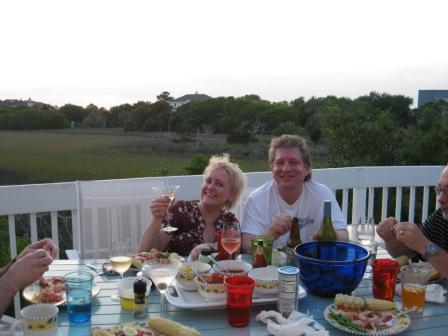 For Wednesday’s lunch I chopped up the remaining shrimp, diced some of the sweet onion and whipped the living daylights out of an egg yolk and some olive oil to make mayonnaise. A drizzle of that shrimp stock reduction, pinches of salt and pepper. I have to say that was one of the most delicious shrimp salads I’d ever had. Made only more delicious by spooning it on top of a piece of cold garlic bread. Much as I might like to think I could recreate that shrimp salad another day, it was truly a product of that moment in time. That combination of Mt Pleasant ingredients, that group of friends, that series of events and experiences that lead up to the simple lunch that was satisfying down to my jauntily-painted toes. 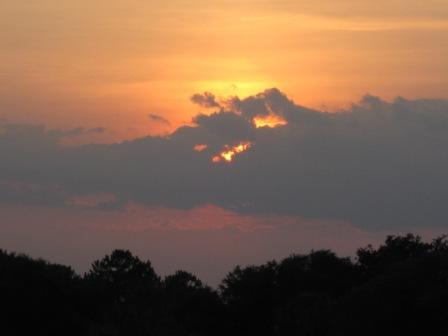