I can’t tell you the last time I cooked French fries at home. Years ago, easily. If not a decade or more. Don’t get me wrong. I love a good French fry, but I’m just pretty loath to glug out a pan full of oil and go through the work of frying at home. Not the mention the clean-up. 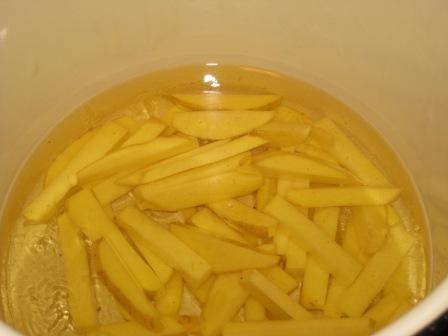 French fry method they’d perfected at Cooks Illustrated. But for whatever reason, I immediately made a shopping list and the next day was doing the unthinkable: adding freshly-cut Yukon Gold potato batons to a pot of cold, fresh-from-the-bottle peanut oil. So counter-intuitive, it did feel just wrong as I was doing so….. But in the hands of Cooks Illustrated, I at least knew that if I was being led astray, I was being led astray by the best!

This is the link to their synopsis of the procedure and why it works so well, along with the recipe itself. The article’s delightfully simple because, in fact, the method just IS delightfully simple. No rinsing of the cut potatoes, just a brief scrub whole and pat dry before cutting. No preheating of the oil or worrying about a thermometer to evaluate the heat level. Most importantly, no fiddling with the double-fry method, long-held to be the answer to perfect fries: frying first at a lower temperature to cook the potato, then removing from the oil, which gets heated to a slightly higher temp to then fry a second time for the crispy-brown finish. Nope, none of that. Instead just combine those potatoes and oil 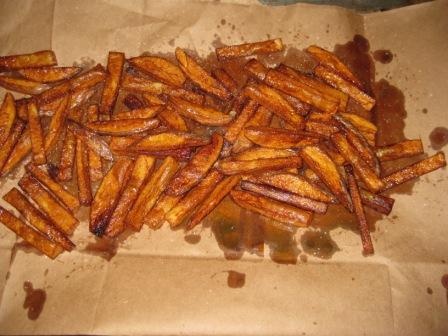 (peanut oil is recommended, that’s what I used, though others are good options), set it over high heat and monitor things a couple times for the next 20 to 25 minutes.

My only departure from the printed recipe was that the fried got pretty brown (as you can see) a few minutes earlier than the targeted time. Not too brown, but just browner than I’d intended. I might recommend you consider doing that gently stir-with-the-tongs step at 10 or 12 minutes instead of the 15 mentioned. Depends on the heat of your burner and random other influences I guess……

Couldn’t help myself. Homemade French fries had me immediately yearning for some luxuriant aÃ¯oli in which to bath them to celebrate their deliciousness (flowery enough for you?? good French fries are worthy of a little excessive adulation). Having whipped up a batch of mayo by hand in South Carolina for the day-after shrimp salad (more on that next post), I was thrilled to have my handy little mini chopper this time that makes the process so easy even a caveman could do it….

Oh yeah. We did have some chicken and a green vegetable for dinner that night too. But far as I was concerned, it was a 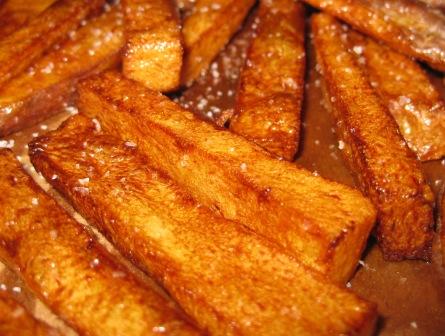 French fry dinner. Easy enough to recreate any night of the week, though I’ll resist that urge. But surely it won’t be another string of years before I next serve up some homemade French fries for friends and family. Hmmm. Now about those variations on aÃ¯oli that I can start playing around with. The delicious fun never ends.