He was such a gem of a man. Monsieur Fernand Chambrette. A gentleman of small stature, big heart, giant talents and not a small dose of the devilish imp that will be so greatly missed by those who knew and loved him, and certainly those who learned from him. 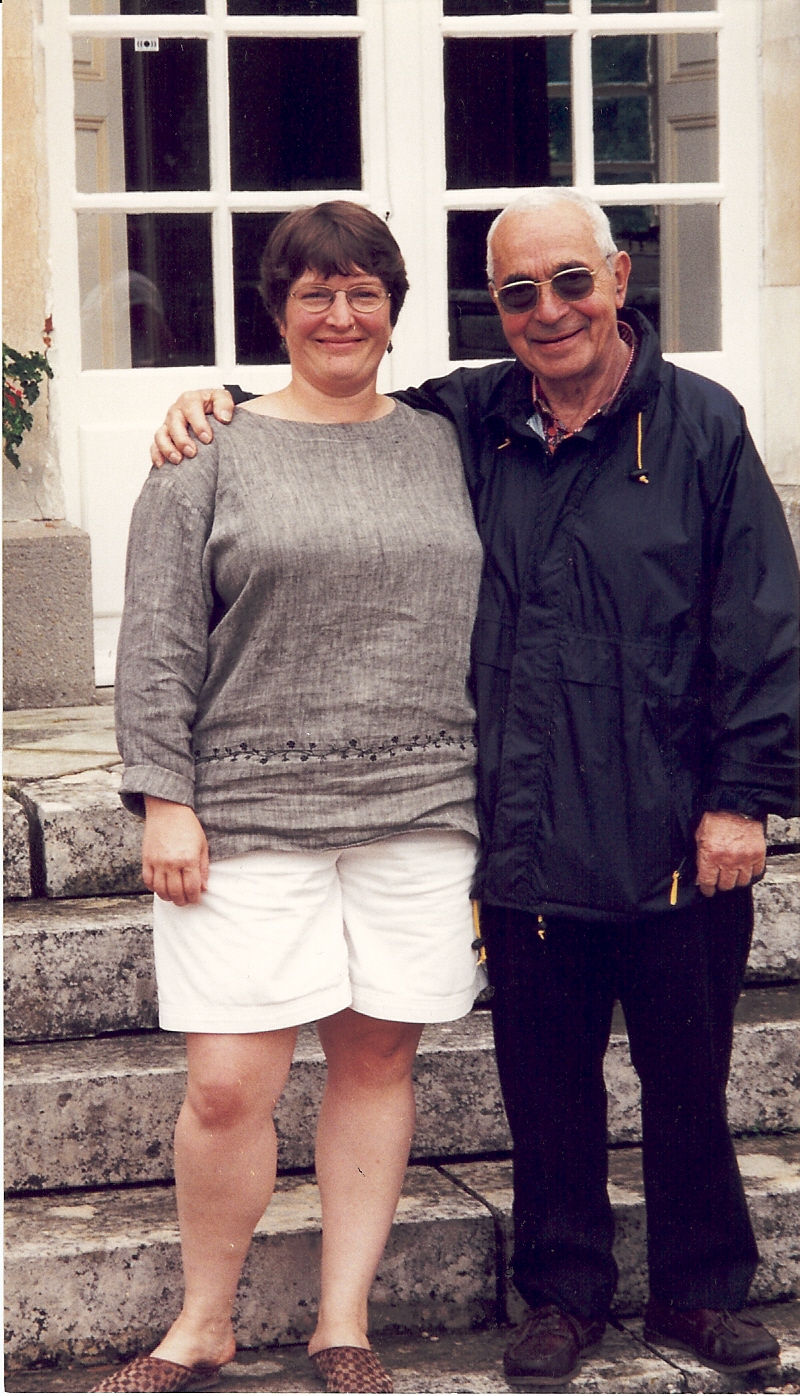 At the Chateau du Fey circa 1991; notice we’re both standing on the same step…

We all knew him simply as Chambrette, though addressed him directly with a respectful “oui, Chef!” He was director of La Varenne Ecole de Cuisine in Paris for many years, having joined the school in 1976, the year after Anne Willan opened the school’s doors. From that day forward, Chambrette was an integral part of attending that wonderful school. In her 1981 book La Varenne’s Paris Kitchen, Anne’s profile of Chambrette notes that he is a “study in contrasts. He professes a cynical attitude toward life, yet has to bite his lower lip to keep from laughing at his own jokes.”

And sometimes he was biting that lower lip to keep from laughing at the awkward, off-kilter, entertaining nature of the wide-eyed students that flocked to France to learn from one of the country’s masters. He was famous for having a particular twinkle in his eye, but when that smile turned extra-sweet and the twinkle turned a little mischievous, it was time to retrace your recent steps and activities and imagine what you might have done to humor him so. But another time, the slightest nod in your direction with a little wink might mean “quick, get over here” as he hands you some trim ends from the foie gras terrine he just unmolded. (If he hadn’t already determined to take it home to his cat.)

Chambrette was a highly trained chef of the old school style, having started in kitchens as an apprentice at the age of twelve. At the height of his restaurant career, he was chef-owner of La Boule d’Or in Paris, a restaurant that gained two Michelin stars. In the 1950s book, Paris Cuisine, that he wrote with Alexander Watt, James Beard said of La Boule d’Or that “it is charming and unpretentious and both Monsieur Chambrette…and his wife…have transformed this bistro into one of the most attractive restaurants in Paris.”

La Varenne became something of a second career for Chambrette, an apt way to continue sharing his talents. Though he never played at the image of French cuisine being fussy or pretentious. The chef ribbed anyone and everyone, short of Anne Willan and her husband Mark Cherniavsky (at least I never caught him doing so!). And he loved to shock and provoke. Rather than delicately dip the tip of a finger into a saucepan to check the seasoning of a sauce, he’d dunk 2 digits a couple inches into the pot and pop them in his mouth to sample. And I swear I once saw him spit into a skillet to check if it was hot enough….

I remember one very ruddy morning at the school in Paris. Having completed my stagiaire program (rather like work-study), I was a full-fledged student for a six-week course. Some random excuse provoked late-night drinking with pals the night before, I was in a delicate, fuzzy state–which I think Chambrette surmised the second he laid eyes on me. The eight or ten of us sat down around the work block and, without speaking a word, the chef picked up one of those live eels and a heavy meat hook. I swear he stared straight at me the whole time as he proceeded to skin the thing (sparing you all the gory details), testing my bleary-eyed stamina for such things.

Chambrette had all the French classics securely under his belt, no doubt about it. Seafood vol au vent, bien sÃ»r. A beautiful vegetable terrine layered with veal mousseline. Croquembouche. You name it. But he was not the least elitist about culinary repertoire. He’d be just as happy, as Anne points out in Paris Kitchen, creating something delicious from bits and pieces of vegetables and leftovers in the refrigerator as he would be tackling a beef tenderloin. Happier, probably. 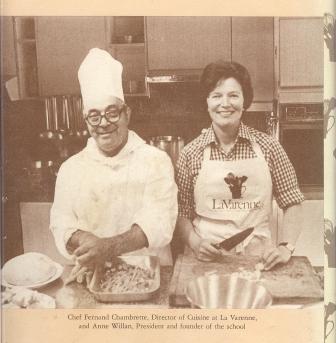 Chambrette and Anne, from the back cover of La Varenne’s Paris Kitchen

He was practical down to the core. Disdain for the food processor? Not Chambrette. I remember a situation when I asked the chef if he wanted me to blend or mince something or other by hand, presuming that showing my knife skills was part of the program. The essence of his response was “why bother? you’ve got a perfectly good tool there ready to do that work for you.”

I have Chambrette to thank for my confidence and delight in making many things, not the least of which is tarte tatin, the decadent upside down tart made with deeply caramelized apples. (A long overdue blog post about that is in the works, I even have step-by-step shots ready to go!). And I can still hear him telling the class about how he felt that “les Goldens” were one of the best apples to use for that recipe. Not a beloved French heirloom variety the likes of Calville Blanc d’Hiver or Reine de Reinette. But the humble Golden Delicious apple. It was a lesson in things culinary and otherwise.

I came along to La Varenne in 1989, about a year before the school closed its doors in Paris, at which point operations continued at ChÃ¢teau du FeÃ¿ down in Burgundy. For several years, Chambrette would hop the train at Gare de Lyon now and then , making the trip to the chÃ¢teau to  teach classes. It was always a treat to have him at the chÃ¢teau for a few days, but it was clear that chÃ¢teau living was not his style. He always insisted on staying in the smallest room over near the student kitchen, the tiny chambrette (little room) that seemed to fit him to a T, literally and figuratively. And any time we couldn’t find Chambrette, sure money was on him having sauntered down to the guardian’s home at the end of the drive. He’d be visiting with Monsieur and Madame Milbert at their rickety little table in the kitchen, sipping Monsieur Milbert’s homemade calvados and talking about the garden and weather and surely gossiping about all the nutty Americans and English and Australians they find themselves surrounded by. Far more his speed than sitting in the grand salon of the chÃ¢teau, chitter-chatting with students and guests over after-dinner coffee and digestifs.

I was happy to keep in touch with Chambrette over the years after I left La Varenne in 1991. We’d exchange Christmas cards (written by Madame Chambrette, of course!) and I visited him a few times in Paris on future visits. Outside of the classroom, away from teaching and being “on” with students, he was such a relaxed, mellow character. It’s almost hard to imagine–sitting in his living room sipping tea–that teaching suited him so well. But it did. And I count myself a thousand times lucky that I was able to spend some phenomenal hours in his presence. As noted on a string of email from friends telling of his death this week, “it’s the end of an era.” Indeed it is.