Yesterday was just one of those days. Mid afternoon I found myself staring out the window into the gray-ish sky, considering the kind of week it had been, the kind of frazzle I felt, the fact that it couldn’t be just Wednesday, really?! — the weekend seemed too far away.

I deserved a treat to nibble on, I told myself. And thought about that bag of raw almonds I’d just bought at Trader Joe’s (my first visit to the new store in my ‘hood!). Which then led to thinking about spicy, crunchy, salty toasted almonds. Might not be the first panacea that comes to mind for a rough day, but it sounded like an ideal treat to me.

My next cookbook, which is coming out in October, is all about this genre of culinary treats, a whole gamut of Salty Snacks

that includes chips and crackers, 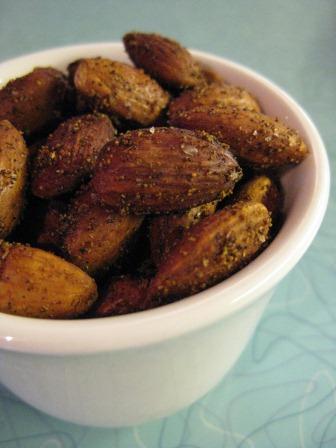 popcorn, mixed nuts, lots of salty-snacky-savory things to munch on whenever the mood strikes. It grew out of (a) a lifelong love of salty things, more so than sweets and (b) a slightly nagging frustration that there are SO many cookie/dessert books on the market and so few that address savory snacks. My contention is that it can be just as easy to whip together a batch of crackers or chips or other snacks as it is to make a batch of brownies or cookies. Yet our home cooking repertoire typically has an imbalance of salty treats in our beloved recipe boxes.

So for these nuts I toasted yesterday, I didn’t even follow a recipe but it was simple enough to recreate here for you. Started with about 1 tablespoon of butter in a small ovenproof skillet (could just as well have been olive oil). When the butter was melted I added about 1 1/2 cups of raw, skin-on whole almonds and tossed them around for a few moments to evenly coat with the butter. Then I scattered over a few spices of choice from the trusty cupboard. In this case, it was ground cumin (a generous teaspoon), ground coriander (about 3/4 teaspoon), ground chipotle chile (about 1/4 teaspoon) and a large pinch of salt. Oh, and a bit of powdered garlic. I tossed the nuts around some more over medium heat just until the spices were relatively well distributed. Then I popped the skillet into a 350F oven and toasted the nuts for about 15 minutes or so, stirring them a few times along the way to ensure even toasting and distributing the spices evenly.

VoilÃ . Hardly any effort at all and before long, I had this dish of  nuts to snack on as my work day drew to a close. (Let the nuts cool at least 5 or 10 minutes, not only so they won’t be too hot to eat, but they’ll have more crunch as they cool too.) Accompanied by the subtle crackling sound they make as they continue to cool, the aromatic, crunchy, salty, fully satisfying were just the treat I had in mind.