I don’t have much of a sweet tooth at all. In fact I often joke that if there’s such a thing as a salty tooth, that’s what I’ve got. But on one sweet subject I can get rather giddy: caramel. Though only really amazing, buttery, rich caramel need apply. I cringe at the thought of those little square caramels wrapped in cellophane that were my caramel norm as a kid. Thanks goodness I’ve grown up and moved on from that youthful indiscretion.

Now only the best will do. Whether that’s an excuisite caramel bathed in chocolate as only Fran’s can provide (sprinkled with a touch of salt to satisfy that tooth of mine). Or a batch of amazing sauce drizzled generously over outstanding vanilla ice cream.

And that amazing sauce may be easier to come by than you think. 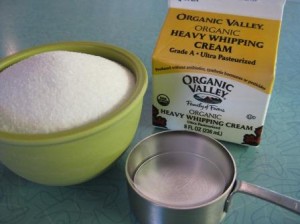 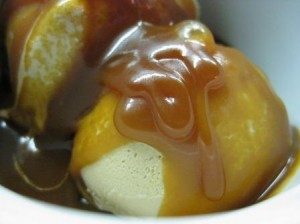 The recipe can actually be accomplished with just two ingredients, the sugar and the cream, but water helps temper the speed at which the sugar caramelizes and generally makes the whole process easier. But use just enough water to moisten the sugar and help 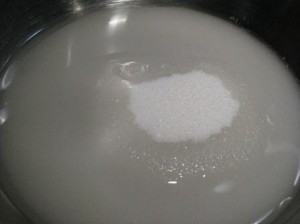 it dissolve. You won’t get to a flavorful caramel until the bulk of that moisture’s been evaporated, so the more you start with only prolongs the overall time needed. I generally use a few tablespoons per cup of sugar.

Start by putting 1 cup of sugar in a medium saucepan and add the water. Later there’s going to be some bubbly drama later, so it’s important to have plenty of upright room in that pan. Don’t be tempted to use a mini saucepan. Warm things up over medium heat, stirring gently with a wooden spoon to help the sugar dissolve. Once the sugar’s dissolved, I try to avoid using the spoon until adding the cream. Instead, I’ll now and then gently swirl the pan to move things

pretty close, but not quite

around a bit and help ensure even cooking. The syrup will start to bubble and those at-first quick-lived basic bubbles will soon become glassier looking and linger a bit longer as water evaporates.

Before long — timing is very fluid, depends on amount of water used, exact temp of the stove, ambient temperature; it’s more important to watch the pot than it is to watch the clock — you’ll start to see light golden color appear, becoming more amber and starting to morph into the browns. Here’s where the fun comes. And where you’ll set the tone for the flavor of the caramel by deciding when to add the cream. The cool cream (whether room temp or straight from the fridge, it’s a heck of a lot cooler than the sugar syrup) will immediately halt the progression of the caramelization of the sugar, so when you add it essentially determines the flavor of the final sauce. An amber colored caramel will have little more than a sweet flavor, while a deep mahogany caramel has the rich, complex, nutty flavor for 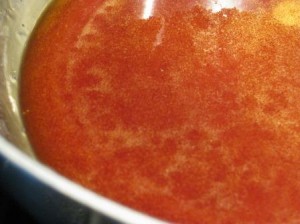 which caramel is so loved. Hitting the sweet spot takes a bit of practice but don’t be too nervous. An extra 15 seconds can take your caramel sauce from “not bad” to “extraordinary.”

When the sugar’s at that mahogany color (you’ll likely see light wisps of smoke rising from the surface, don’t be alarmed), turn the heat to low and slowly pour in about 1 cup of heavy cream — which causes the caramel to bubble up quite a lot, but it will subside very quickly. The cool cream also invariably hardens the caramel somewhat, which is no problem. Simply stir gently over medium-low heat until the caramel is fully melted again and the sauce has a smooth texture. Set aside to cool to room temperature, then serve or refrigerate for later. The sauce will firm up quite a lot when cold, so simply warm it up a bit again before using. 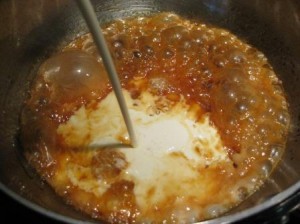 You can alter the consistency of the sauce by using more or less cream. In my Gourmet Game Night cookbook, I have a recipe for brown butter pound cake that I cut into fingers that get dunked into a caramel dip. For that recipe, I use 1 1/2 cups of heavy cream for a thinner style of sauce. This recipe, with 1 cup of cream, has a luxurious coating consistency ideal for ice cream.

Friends over for dinner and games last night devoured the rest of this batch that I made in preparing this post. Nothing like great caramel to bring a smile to everyone’s face. 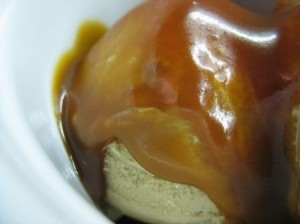