Farms and Mines and Salmon

It’s been a big week for salmon, at least here in the Seattle area, with two sizeable stories in play. One new, one older but with a new timeliness.

The new news was the terrible failure of farmed salmon pens near the San Juan Islands. I’ll admit to not having been aware of how many salmon farms operate in the Puget Sound area, so along with the massive dump of Atlantic salmon into the native habitat of wild salmon comes the wake-up call about how much more potential impact could come from other active farms. No limit of controversy looms in the days following the incident Sunday, with contrary perspectives on to what degree extreme eclipse-related tidal activity was at fault (and why those high tides proved surprising), on how much impact those nonnative salmon will have on native populations, on the likelihood of them perishing before they get very far into regional river systems. One article I read earlier this week suggested the Atlantics would be as likely to survive out of their controlled farm environment as a dairy cow released into the Serengeti. But an article Friday noted that Lummi Tribe fishers have caught Atlantics in the Skagit River and the latest piece I read this morning says that Makah Nation fishers have netted Atlantics on the Seiku River near Neah Bay, suggesting their ability to survive may have been underestimated. Having spent time on Lummi Island with salmon-fisher Riley Starks–including a visit to the Lummi Island Wild reef-netting operation he’s part of–it’s been particularly heart-breaking to hear the

extraordinary challenge the fish dump has been in that region.

Many times this week I’ve had flashbacks to a conversation I had with the manager of a salmon processor up on Alaska’s Kodiak Island the summer of 1997. He was lamenting the rapid growth of salmon farming and its effect on overall market price for salmon, even prized wild salmon. I recall saying something to the effect of “farmed salmon are clearly here to stay, can’t fight that wave of production, but we can make a point of celebrating the value and appeal of wild salmon as a premium product.” I was editor at Simply Seafood magazine during much of the 1990s, a time when farmed fish was a big and relatively new topic. Farmed salmon, and other fish, may be anathema to those of us who–for ecological or gastronomic reasons, if not both–will always choose wild, but they have become mainstream fare for much of the population. I’ve always considered that wild salmon stands out against farmed salmon the way a gorgeous piece of artisan cheese stands out next to a piece of commercial cheddar. They’re just entirely different products.

Farming fish in the same waters that are home to their wild counterparts never seemed like a good idea to me. Land-based closed systems of course require more work to establish than dropping pens into existing natural habitat. But they alleviate the potential issues that come with dropping pens into wild habitat, which introduces a hyper-concentrated population where impact (feces, excess feed, potential for disease) surely can’t be fully benign–even when everything goes as planned. Trying to stop fish farming is unrealistic and not the answer, the potential for healthy protein this aquaculture provides is important for feeding the planet. Taking those farms to parts of the world where the production of healthful protein would be most beneficial–and the farming operation itself an economic benefit to the region–always made the most sense to me. We should not be farming salmon in the land of wild salmon. The concept’s not bad, but the location certainly is.

On the old-but-new salmon news front, I joined a few dozen from the restaurant industry at Hot Stove Society downtown Seattle on Wednesday for updates on what’s going on with the Pebble Mine project that is being proposed for Southwest Alaska. We’d all been hearing quite a lot in recent years about the Pebble Mine, which is in the vicinity of Bristol Bay. The potential value of the copper and gold that could be pulled from the earth there is mind boggling (I’ve read in the hundreds of billions of dollars). But so is the potential for disaster that could beset the region if mining safeguards fail and this unique, pristine, vibrant watershed is ravaged. Bristol Bay is home to the largest runs of sockeye salmon in the world, not to mention other wild salmon and countless other sea life. And in turn, the human population of the region relies on those resources for their cultural, economic and sustenance value. I haven’t been to Bristol Bay, but I have been up to the Yukon River further north in Alaska, visiting a number of remote Native fishing camps and witnessed first-hand the incredible importance of salmon caught there, being smoked and salt-cured for them to eat through the harsh winter and spring. We had not one bite of salmon that week, every ounce prioritized for their subsistence needs. 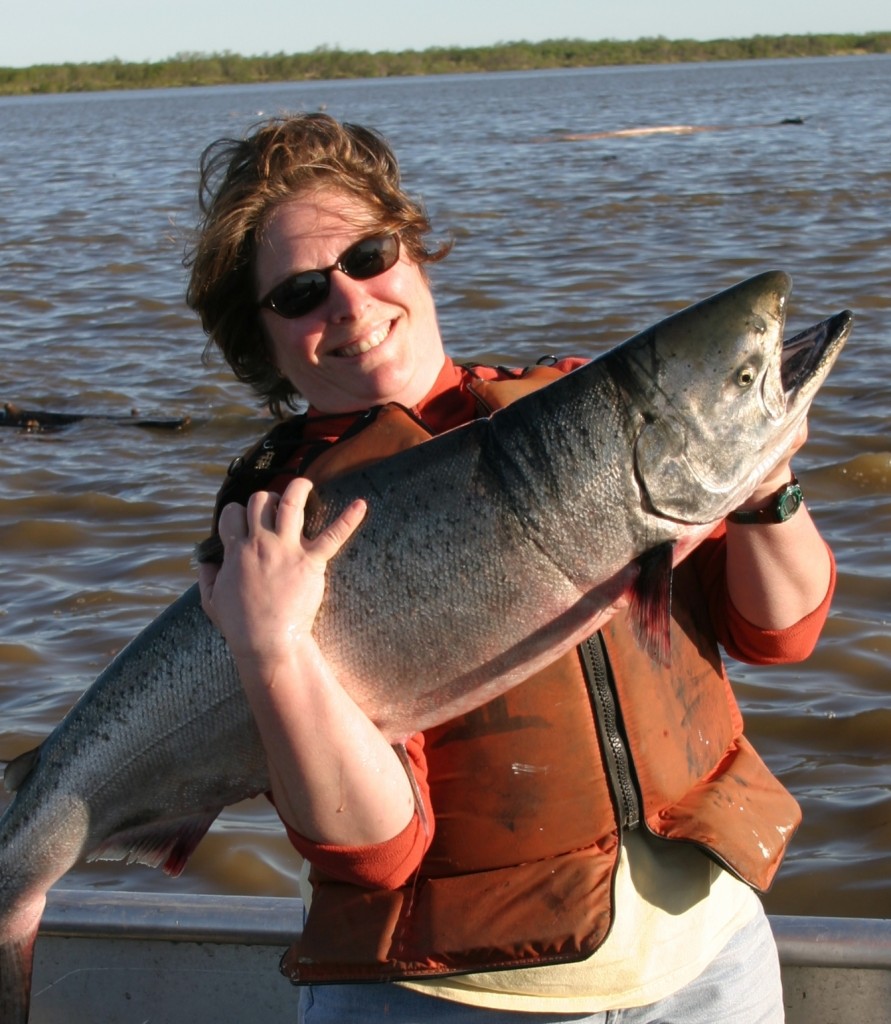 Not Bristol Bay, further north up on the Yukon River

This particular mining project has been in the works for a good decade, with an array of interested parties well beyond the entity that hopes to mine there, and the State of Alaska that owns the land on which the mining permit would be granted. This Wikipedia post seems to do a pretty good job summing up where things stand, the environment in which the mine would operate and perspectives from both sides of the issue. And this piece from the New Yorker earlier this year offers interesting background and perspective as well. For a deeper hour-long dive, this episode of Frontline was devoted to the Pebble Mine situation–it originally aired in 2012, and some elements have changed since then, but the broad overview offers interesting details, voices of many folks on both sides of the controversy, plus imagery of the region and mining industry practices that add well to the story.

Like fighting farmed fish is an effort to hold back the waves, there’s no sense in trying to fight the idea of mining. But a common phrase in this case is “the wrong mine in the wrong place.” Sure, the mining operation promises state-of-the-art engineering and suggests no reason to worry about environmental damage. Their web site even touts their environmental stewardship, stating that “If it’s a choice between fish and mining, we go away. Fish have to come first.” But an event of large proportions could have devastatingly irreparable impact on wild salmon, something no amount of post-event apology could repair. And the potential for less dramatic but on-going (and more insidious) seepage of toxic byproduct into the ecosystem could be disastrous as well.

Chef Kevin Davis, owner of Blueacre Seafood and two other popular Seattle restaurants, is an avid supporter of wild seafoods and preservation of their habitat, not only as a cook but as a sport fisherman. He spoke passionately at the Pebble Mine event about how crucial preservation of the Alaska salmon habitat is, referencing the lessons learned decades ago with the wild fishery of Atlantic salmon on the East Coast (essentially non-existent today) and lower-48 Pacific coast harvest (facing a range of challenges in recent years). He was addressing where we would be left should mining operations devastate the native habitat of salmon in the Bristol Bay area, but it could just as well apply to the farmed-in-native-habitat story as well:

“We cannot replicate the unique tapestry that nature has provided to allow salmon to survive.”

If the bet that an enormous mining operation in the midst of a watershed that supports one of Alaska’s most important salmon populations can live in perfect harmony with those salmon is a bet you don’t think should be made, you can go to Save Bristol Bay to show your support. And you can go directly to the EPA’s site where they are taking those public comments (you can also comment via SBB).