I’ve come to accept that I’m a bit of an oddball regarding the degree to which I have an anti-sweet tooth. I played up that fact in the introduction to Salty Snacks

, noting that I’ve long had what I thought of as a salty-tooth where everyone else seemed to have a sweet tooth. And while it’s true that I generally prefer savory foods to sweet (particularly in the snack realm), it’s more than that. I actively dislike sweetness where–to my palate–there’s no call for it. I don’t want honey in my vinaigrette, maple syrup on my Brussels sprouts, sweet cocktails or raspberry glaze on my pork chop.

A total kill-joy, I know, but that’s just how I’m built. Not that I don’t ever eat sweet stuff, I’m not that militant! There’s an occasional dessert when eating out or dish of ice cream at home. I just tend to keep my sugary intake confined to desserty items and only opt for those now and then.

Which leads to today’s reflection on that classic American picnic element and casual side dish: coleslaw. The delightfully crisp combo of shredded vegetables is so often bathed in a sweet dressing I most always take a pass when I see it on a menu and stick to enjoying it primarily in its homemade form. I suppose lots of home cooks have a list like that: foods that disappoint often enough in restaurants that you just avoid them until you (or your mom/sister/uncle, whoever makes your gold-standard version) can whip it up at home again. 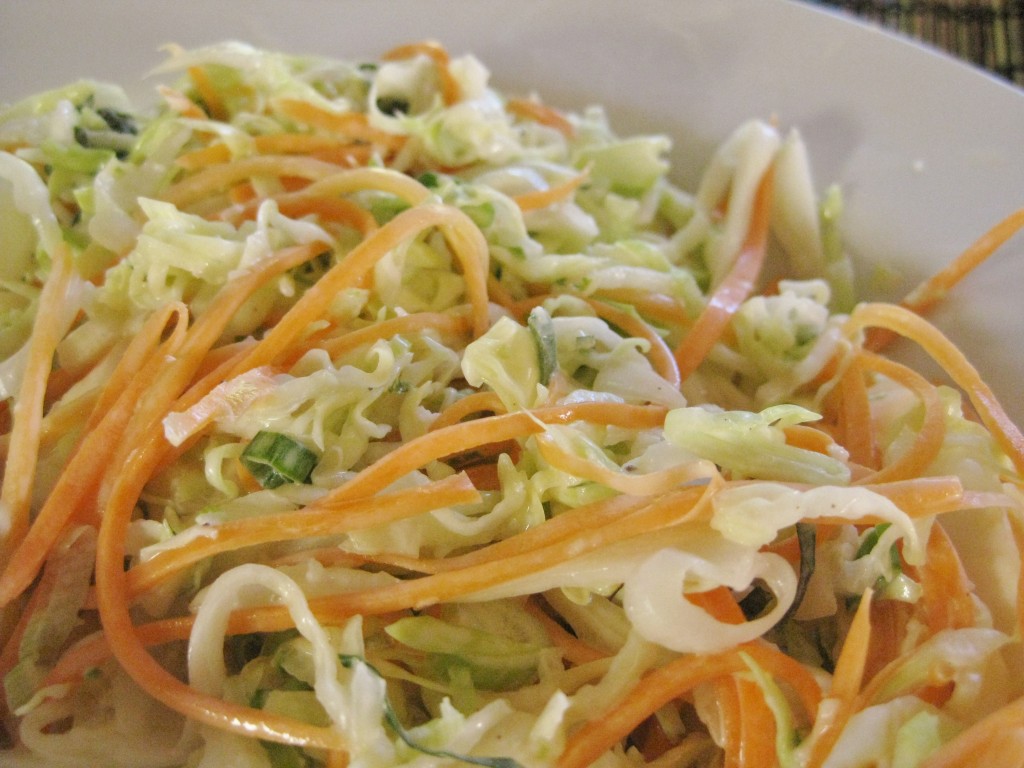 By definition, cabbage is a key player in coleslaw: its name derives from koolsla, Dutch for cabbage salad, according to The Food Lover’s Companion

. Even there we’ve got a few options to choose from: green, red, Savoy, Napa and the mini-version Brussels sprouts. Onion is a common addition, whether yellow, sweet, green, red. Other vegetables that play well in slaw include carrots, radishes, fennel bulb and cucumbers (bell peppers if you must but I find they overwhelm other flavors in the slaw). A rogue fruit that can add a great crunch of complimentary flavor is apple, particularly tart types.

When it comes to dressing, the beloved American-style coleslaw most always has a creamy style based on mayonnaise, sometimes with a dose of sour cream as well. Thinned a bit with vinegar and accented with any from a range of seasonings–celery seed, mustard, pepper, caraway seed, horseradish, garlic, chives, parsley, fresh chiles, so many options. You can skip creamy and go vinaigrette style instead, which is particularly good for an Asian-inspired slaw with ginger and sesame (both oil and seeds).

Those hip folks over at ChefSteps devoted their modern-cuisine energies to the topic of slaw, which I came across just before posting this. They’ve got a bit of the sweet thing going on too, though with addition of raisins rather than from a sweet dressing. Easy enough to adjust, with the contrasting peppery bite of the fresh horseradish that I love.

With all those variables at play and nothing at all complex about its construction, coleslaw is one of the easiest house specialties anyone can develop without a recipe. Basically: start with cabbage that’s thinly shredded, add some other crisp vegetables that you love (grated, thinly sliced or shredded), whip up a dressing and toss the delicious mess together. If you’re like me, skipping the sweet stuff along the way. Though, sure, add some sugar/honey/raisins or whatever floats your coleslaw boat. Change it up next time or return to a mix that suits you best. That’s the pleasure and satisfaction we get from cooking at home: food just the way we like it!

In that vein, I’ve made coleslaw in may variations over the years. But for dinner last week, when time was a bit short, this is the version that I made: traditional green cabbage finely shredded, carrots finely shredded, green onions thinly sliced. And since my shiso is robust right now, I finely shredded a couple leaves for that pop of herbal flavor. The dressing involved little more that mayonnaise, fresh lime juice, minced garlic, salt and pepper. Bright flavors, great crunch, an ideal accompaniment to grilled fish for a simple summertime supper.