Games on the Go

I wrote last summer about the sometimes-conundrum of how much luggage space you can–or should–devote to games when you’re traveling. It’s similar to what happens in the “what to pack?” question for clothes, too, never know what the weather’s going to be like, what mood I’ll be in any given evening relative to dinnertime togs. As usual, I opt more for playing it safe and over-packing a bit (as I did with that heavy set of dominoes last summer!) than regretting something left behind.

I can’t say how many times my husband and I have ended up on a trip somewhere never quite intending that we be playing games, 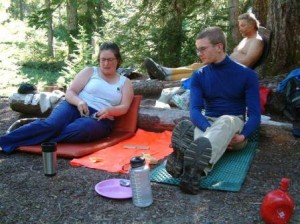 only to wish that we’d had something along with us to kill some time on a rainy afternoon, or taking a break back at the hotel after a full day of exploring. Pay-dirt is when you drop into a coffee shop or casual restaurant and they have games on hand for customers to play while sipping and nibbling, but that’s hard to count on.  It’s gotten so that our go-to weekend bags now have a dedicated pack of cards tucked permanently into one of the pouches. That and one of those cheapy little travel corkscrews. Another thing you don’t want to be lost in the wilderness without. Though getting to be less dire a possibility thanks to evolution of the screw-top.

But back to games. Those perma-travel decks of cards are one great fall-back. And for cases where space is as a special premium, we’ve got a couple mini-decks

of cards as well. When we left on our honeymoon umpteen years ago, facing a loooooong flight to New Zealand, dear friends sent us off with a sort of in-flight care package, with something new to open every hour of the flight. One package early on contained one of those mini card decks, which became a staple on our trip, so easy to tuck in my purse and have at hand for an impromptu couple hands of rummy at random points along the way.

On one particularly dreary and drizzly backpacking trip when I was a kid, we unfortunately did NOT have any cards–mini or otherwise–to bide the time while we stayed in camp an extra day, allowing the weather to pass before we continued down the trail. I was so desperate that I used some paper from a little notepad that I’d brought along to hand-craft a deck of cards to keep us company while the rains continued to fall. Otherwise — as much as my family was big on playing games at home, once on the hiking trail we didn’t really need any such diversion from the shear pleasure of being in the beautiful wilds of the Northwest. Though on a hike in the Olympic Mountains a few years ago, we did pack along some dice to play Zilch, and one of those mini decks of cards with a 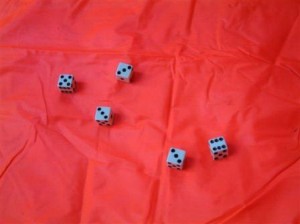 Looks like Backpacker Magazine has covered this weather-related need for something to pass the time. In this archived article they cleverly suggest drawing some simple game boards (as for checkers or tic-tac-toe) onto mattress pads to have at the ready should the skies open. And it was fun to see this conversation on one of the magazine’s online forums about various games folks take along on their hiking trips (along with some who prefer to play “listen to the critters” and “look at the stars”).

REI, that shopping haven for outdoor types, has a (surprising) number of games in their online catalog, many of which aren’t particularly designed for backpacking–more for car camping or just playing around at the beach or in the backyard. But this version of Uno, cards that are waterproof, is a great option. As is this compact travel backgammon-board-in-a-bag. And when you have no games at hand but want to make the most of your wit and charm and non-verbal communication skills, there’s always charades!