The Nature of Salmon: Northwest Treasure

Asparagus, tulips and salmon, oh my. It must be spring in the Northwest. Though, granted, this year’s very chilly and damp spring 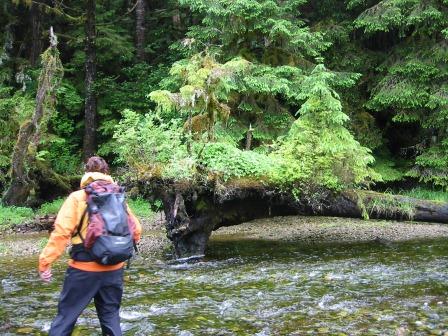 has meant delay in the produce and flower departments, it’s unlikely that the piscatorial harbinger of spring will be off its typical mid-May schedule by much. The Alaska fisheries managers have announced May 16 as the date for opening season of commercial fishing of king salmon on the Copper River, an event that serves as the kick-off of the state’s commercial salmon fishery for the year. Though there are smaller fisheries of troll-caught salmon that occur nearly year-round from southeast Alaska, it is the Copper River that serves as the launch of wild salmon season. Over the years I’ve had some phenomenal opportunities to connect with salmon in up-close-and-personal fashion. One story I told in a post last year. Another for your enjoyment here.

I was groggy from the long trip north that June day five years ago. Not as-the-crow-flies long, which amounted to just 700 miles or so north-northeast of Seattle. But I recall it was a Seattle-Vancouver-Prince Rupert, B.C. string of flights, then we were shepherded to a float plane dock from which point we made the final hour’s trip a bit southward to Barnard Harbor on the lush, remote coastline of British Columbia. Most everyone on the flight from Vancouver to Prince Rupert seemed to be heading there with some focus on fish. Me, I was exuding the journalist’s cool, somewhat reserved, I’m-here-for-the-story attitude. Others were wearing their intentions on their heads, with hats that said “which way did they go?” with a silly fish stitched alongside.

As tired as I may have been, I just could not wait to launch the adventure of spending 4 or 5 days at the amazing King Pacific Lodge, perched on the water, built on an old US Army barge. This destination would have been beyond my means as a regular guest, but I was given an opportunity to visit the lodge while doing research for my Salmon

book in the Northwest Homegrown Cookbook Series. I’d be able to experience salmon fishing in British Columbia from the sport perspective–an opportunity I simply couldn’t refuse. I dropped my bags in my room and took our hosts up on the offer of a quick hike before dinner. My guide, Marlene, got me geared up for a potentially damp trek and off we went to nearby Cameron 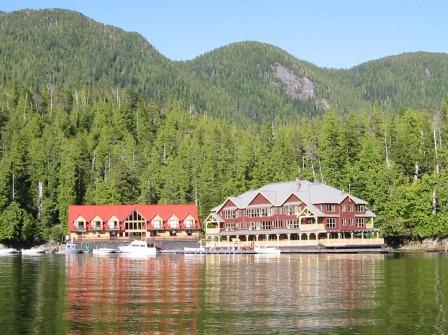 Cove. We maneuvered across barnacle-covered shore rocks, past evidence of ancient Native weirs, low stone walls extending out from the shore into the shallow bay. Salmon would swim deep into the bay at high tide, then as the tide receded, they’d linger behind in the water trapped by the weirs, the salmon then easy to harvest from the enclosures that allowed the fish limited chance to escape. A quick glance at something ancient and remarkable, it set the stage for an amazing week.

Marlene and I continued on, away from the shore and into the thick forest, following a small but rushing river. Breathing deep, the aroma was immortal, of moss and salt water, spruce and musky earth. It was another world from the bustling city I’d left just hours earlier. I was transported and serene, in a way only nature can manage. As we walked along, Marlene had her eye out for points of interest, an amazing nurse log (the Florence Nightingale of nurse logs!), eagles on the hunt. Then she looked down and spied something I’d likely have missed. Or if I had been alert enough, likely would still have missed its significance. Green with fungus and ragged at the edges, it could have passed for an unremarkable chunk of rotting wood.

Instead, it was something magnificent. The jaw bone of a chum salmon, which takes on an exaggerated protruding profile when spawning. A bear last fall had surely swooped the fish from the river with his unyielding claw and brought his prize these few dozen yards into the forest to avoid competition from the other bears. After having made a fine meal for the great animal, the salmon’s carcass was left at the base of this huge cedar, to decompose and nourish the trees and moss and other plant life

surrounding. I was silenced, so moved by the simple but powerful display of the complete cycle-of-life that Pacific Northwest salmon represents.

That moment, standing in the impressive and inspiring Great Bear Rain Forest, is what crept up in my consciousness about this time last year when I met photojournalist Amy Gulick. It must have been June, actually, because we were in the company of aromatic delicious strawberries from area growers at a gathering put on by Jon Rowley at Anthony’s HomePort. As soon as Amy mentioned the name of her then-new book, Salmon in the Trees

, that image of the salmon jaw bone came vividly to mind. Her book chronicles–in photo and essay form–the ecosystem of southeast Alaska’s Tongass Rain Forest (which starts not far north of Prince Rupert), with salmon as the protagonist, noting that “wild salmon are the crucial link between the forest and the sea, and shape both animal and human lives.” In the book’s introduction, she notes the dynamism of the role salmon plan in the region, saying “those who survived their time in the ocean, dodged the hooks, nets, beaks, and jaws of predators, and returned to their birth streams to spawn and die are still here. These salmon live on in frolicking spring cubs, plump blueberries, new growth rings in tree trunks, and downy eaglets perched in their nests.”

The book is a testament to the interplay of geography and culture, ecology and humanity, the cycle of life in an ancient and stunningly beautiful setting. The timelessnature of that cycle and the vitally important role played out when nature is left to its own devises, in massive protected natural treasures such as this amazing Tongass Rain Forest. That salmon is a Northwest treasure, I don’t think there’s much argument. But it’s nice to be reminded how deep and multifaceted that impact really is, beyond simply how delicious it is on our plates. Something to consider with each delectable bite. 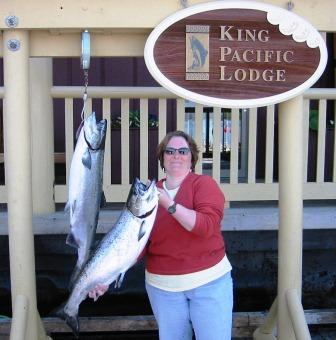