A Taste of South Carolina 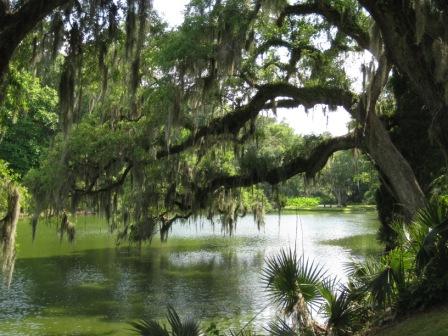 Endless acres of Spanish moss hanging from trees; this at the Middleton Place plantation.

For a couple of months there, mid May couldn’t arrive soon enough. I’m truly thankful that this year’s been such a full and busy one work-wise, but the load was almost too much, lots of irons in the fire, lots of deadlines on my to-do list. Maybe I’d bitten off a bit more than I could chew. May 15 became the light at the end of the tunnel, the carrot toward which I was running so hard! So after turning in a huge amount of work in the weeks leading up to mid May–the last email of recipes for the 2010 volumes of Celebrated Chefs cookbooks going off late in the day of the 14th–off we went. To South Carolina. A state I and my five travel-mates had never stepped foot in before. With no expectations of that week beyond a change of scenery, a chance to clear the head and relax a bit, the pay-off was huge. We stayed up late playing games, slept in, curled up in chairs to read, explored Charleston, watched the Thin Man, got our toes in the sand, talked and laughed and ate very well together. It could not have been a more perfect vacation (well, aside from getting caught in a deluge of rain one afternoon, soaked to the bones; but hey, we’re from Seattle and at least we don’t melt). And I’ve got a list going of things yet to see and do, things to fuel another trip to the region. 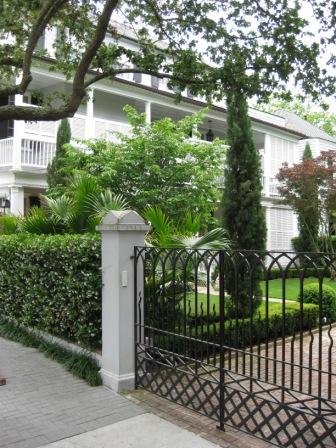 Ambling around Charleston on our horse-drawn carriage

We didn’t stay in Charleston proper, though visited the city a few different days that week. Our home base was the house of a friend who’d put a week’s rental up for an auction last year. (One of the best auction purchases we’ve been part of in recent years!). Having a house made all the difference, flake out on the couch, grab a snack any time of day or night, pull out the grill to cook up some steaks, a well-stocked kitchen for cooking dinner–and making cocktails, I might add! We were on the lovely and relaxing Isle of Palms a mere 20 minute drive from Charleston. Best of both worlds, if you ask me. Makes me long for more vacations that come with the kind of place you feel becomes “home” after a couple of days. You know, “your” chair for reading, rhythms of who’s up first to make the coffee and who’s likely to clean things up after dinner. It was awesome.

One of the “must-dos” on our Charleston list was taking a horse-drawn carriage ride around town. And sure, it’s touristy. But like a trip up the Space Needle, it’s something everyone’s got to do! Just the kind of thing, in particular, on a first-time visit to a city. Gives you some great perspective, history, a little local color. I’d highly recommend that to anyone visiting Charleston. We had a great guide narrating the hour-long trip, but the carriage was drawn by a new-recruit of a horse who had a little trouble walking a straight line. Loved hearing stories about the houses (medallions on an outside wall indicated which fire company the house was insured with way back when; only that company would bother to try putting the fire out should your house have become victim to flames) and the city. Of course a little contemporary reference to their governor and his Appalachian exploits, that got a good laugh. As did reference to one of the city’s oldest trees and whether, in fact, Strom Thurmond himself had planted the seedling. They do have some colorful politicians in South Carolina! 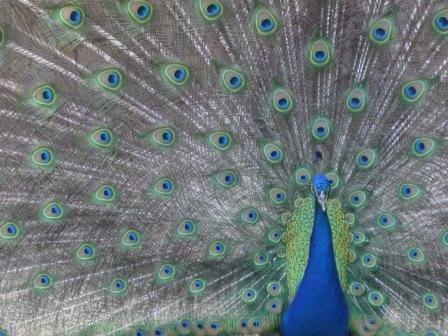 Palm trees. Shrimp, often seen in the company of grits. Local Palmetto Ale. Pimiento cheese. Sweet onions and boiled peanuts. Miles and miles of sandy beaches. Zilch (the game; not the nothingness the name implies). These things consumed much of our attention that week. And a great week it was.

I’ll be honest. We all agreed that the best meal we had was the Tuesday night dinner we cooked at home. Early that morning we’d gotten a call from our shrimp guy (it didn’t take long to cozy up to one of the local shrimp purveyors in Mt Pleasant) saying the boat had just come in and fresh shrimp were ready for the sellin’. And it happened to be farmers market day as well, we hit the stalls that afternoon and did a pretty good job covering bases to ensure not only a great meal that night, but some mighty fine snacking for a day or two. That dinner deserves its own post, which will follow soon-ish.

But we did eat out pretty well too! Fresh off the airplane, four of us drove into town for dinner at Hominy Grill. Classic. Much of the menu’s on the chalkboard posted on the wall, much of that listing the night’s side dishes, which range from grits and collard greens to macaroni & cheese and red field peas. We tried a number of them (LOVED those red field peas, cooked up with some stock and bacon of course), thumbs up all around for the crab and egg salad, shrimp & grits and pimento cheese with beet-boiled eggs. This is the only place we tried boiled peanuts all week and to be perfectly honest, it was not an enchanting introduction. Must be an acquired taste, or maybe one you just need to grow up with. The nuts were soft and starchy, not a whole lot of flavor; blind-folded I’d have likely never guessed “peanut.” I much prefer them roasted, even the fried-in-the-shell version we got at the farmers market a few days later (you eat them whole, shell and all, nice and crunchy!). 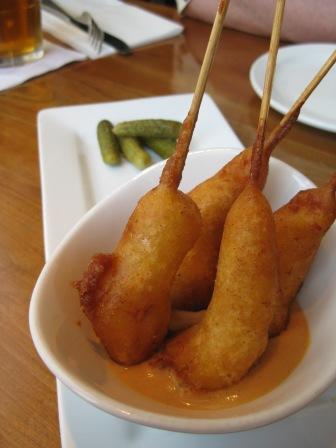 We loved, too, Poe’s Tavern on Sullivan Island, enough that we went back twice!! Edgar Allen Poe was stationed at nearby Fort Moultrie around 1828 and based his story The Gold Bug on his time here. Great burgers, my favorite the Gold Bug Plus, with pimiento cheese, roasted garlic blue cheese, and jalapeno jack cheese. Hand-cut fries, great bacon-blue cheese coleslaw, tasty tacos too. Highly recommendable! And the women’s restroom is plastered floor to ceiling with pages from Poe stories, should you need any reading material while you’re in there…..

Another favorite was Amen Street in downtown Charleston. Lunch there one day was ideal to fuel us for an afternoon to wandering King Street to check out antique shops. We’d read about their shrimp corn dogs, started with a couple orders of them, very fun. Nice hot mustard dip, lightly coated shrimp, flavorful. I’d have liked a bit more corn dog-like coating, some cornmeal in the batter, but small quibble. My fried green tomato BLT really hit the spot. It was a great lunch spot in a bustling part of town. We opted to take dessert just a couple blocks away at Baked. Wonderful bakery, lots of delicious indulgences from old-fashioned layer cakes to great little Parisian macaroons. 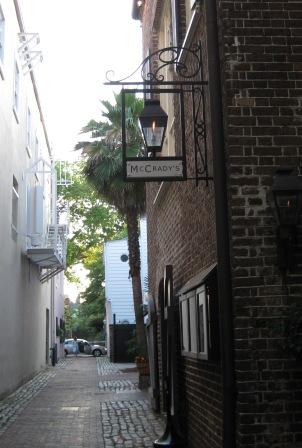 Entrance to McCrady’s on a small side alley downtown.

The “big” dinner out we chose McCrady’s, just a shrimp’s throw from Baked. Chef Sean Brock had just a couple of weeks earlier won the James Beard award for Best Chef: Southeast. In fact he was the third Charleston chef in a row to earn that award, the last two honorees were Mike Lata from Fig (didn’t get there, next time!) and Robert Steling from  Hominy Grill (downhome fun, we’d go back for sure). Just to confirm the culinary chops of this South Carolina city! We opted for the night’s tasting menu, to get the full spectrum of a first-timer’s experience. I’d read a bit about chef Brock and the restaurant before leaving, but hadn’t picked up on his penchant for modern, rather high-tech cuisine! So the “scallop with rhubarb, celery and cilantro ice” that lead off the menu wasn’t a scallop as we’re familiar with them, instead a reformed scallop, puree of the shellfish having been cast in a thin square that was the base for the complementary ingredients. It was a fun and engaging presentation, though we all wished that the scallop part had retained a bit more of its sweet, rich scallop flavor. A bit of its character was lost in the modern interpretation. But the rest of the menu was a big hit: grouper with zucchini and bonito, pork belly with farro and green garlic, sweetbreads with lobster legs and artichokes, plus a few other courses. We sipped a bottle of Champagne with the early courses, one I’d never had before. And one that really caught my attention with complex layers of flavors that were perfectly balanced, lush and delicious! Chartogne-Taillet. If you see it anywhere, get it and have a sip for me! Then tell me where you found it……

Oh, I could go on and on and on about our trip. Tell you about our drive out to Middleton Place for a taste of antebellum plantation life. Or wax lyrical about the few hours spent on the beach one day. I just walked and walked and walked barefoot right at the water line, waves petering out just as they crested over my ankles.  Or the fun we had getting to know the local Piggly Wiggly where we stocked up on essentials for our shelves back at the house. Maybe more of that will come up in future discussions. Along with that chronicle of the amazing farmers-market shrimp feast we had one night!

Until then, here’s capping this chronicle off with a snapshot of the closest we got to an alligator on the trip, at Middleton Place. Close enough!!! 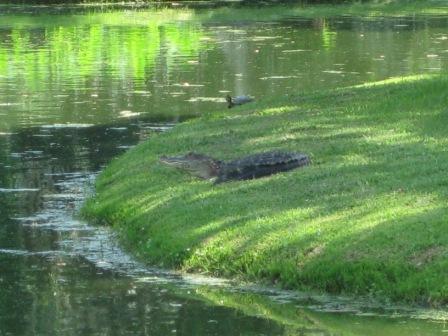