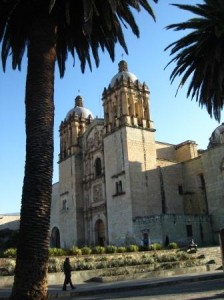 I realized I’d taken a lot of photos when I got that error message saying my 4GB media card was full. Thankfully it was the last afternoon of the weeklong trip to Oaxaca and I had my phone at hand to capture some final images before packing away my t-shirts and sun hat and dried chiles and corn husks along with an overload of sensory input and experiences to pack along home as well.

That’s just one measure of what a full week it was , no doubt about it. Ten of us (friends old and new) traipsed around together–from wandering the streets of historic central Oaxaca City to the dusty heights of impressive Monte Alban and from morning into night. Given Oaxaca’s prominence as the culinary heart of Mexico, it’s appropriate that this introduction to the region should be through its kitchens and market stalls under the amazing guidance of Susana Trilling, wonder woman behind Seasons of My Heart cooking school. I now can’t imagine any other means by which I’d want to visit this place than through its food (with a splash of mescal now and then!). This is its soul.

If I were more poetic in nature, I might write an ode to the comal. That humble, almost-flat earthenware disk perched over a crackling fire just outside the school’s kitchen door was a noble workhorse. The first day of classes, we watched as three types of cacao beans were toasted on its surface, soon to be ground with cinnamon stick (also comal-toasted) and sugar to make Oaxacan chocolate that we were nibbling within a couple of hours. In the following days the ingredients that lingered on its surface came to include avocado leaf, nopales (cactus paddles), onion, tomato, chiles both fresh and dried, nuts, seeds and garlic. And the day I made Tetelas de Juxtlahuaca (triangles of flattened masa filled with spicy beans) they were cooked on the comal as well. Lots of character lives within the chemistry of that tool after all the great food it has touched. 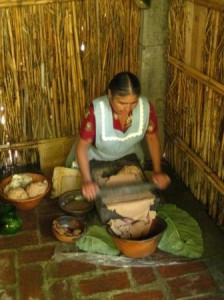 If an artist, maybe I’d try to capture on canvas the colors that astounded me around every corner. The boldly painted buildings against that clear azur sky. The unreal vivacious color of the bougainvillea and poinsettias and other flora along our paths. My eyes boggled at the incredible array of shades of blue, red, orange, green that they absorbed in almost every moment throughout the week. Among the surprises of our excursions were the lessons we had in traditional pigment. First was with a family that spins and dyes wool to use in their traditional woven rugs and other pieces. Earlier in our visit we’d noticed large paddles of cactus hanging from the ceiling with small splotches of white that looked like mold. Instead those splotches each harbored a small critter, the cochineal bug that’s source of that deep red dye I think we’ve all heard about by now…it’s gotten a lot of use, including for food and drink applications, for generations. Even Starbucks used it for a while, but gave it up, apparently after reading public reaction. The dried bugs were ground on a metate (a different one than had been grinding cumin seed and garlic a bit earlier!) to make a fine powder that–with a dab of water–became a deep crimson liquid. From there he showed us variations to go from orange to purple, and told us of other items (marigolds, moss, dried pomegranate) that offer other hues. Another at a wood carving shop used the bark of a particular tree for its base of red hues, indigo for blues. A little acid, a little alkaline, and they have a broad spectrum of natural colors to work with. 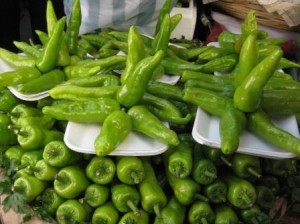 The local chile de agua used in many Oaxacan dishes

Photographers with much more skill and focus than I would have made masterful  portraits of the people we encountered through the week, the incredibly gracious families who opened their homes and kitchens to us,  the staff who stood at our elbows to guide us through lessons, full of smiles and laughs (most often laughing with us, only occasionally laughing at us and only when we deserved it!!), the market vendors, our guides, our ever patient and friendly driver. I think many of us would agree a favorite destination of the week was with the Los Navarros family, three adult sisters, all expert weavers who are masters in the kitchen as well, showing us ingredients and recipes that date to pre-Hispanic times. The one tending the comal making tortillas from masa freshly ground that morning (it was still warm from the grinder!) was generous with her help allowing us each a hand at initially working the small ball of masa with just enough water for ideal texture, then forming the round (with a post-Hispanic tortilla press) and gently draping the round onto the hot comal for cooking. I’d add “supposedly” to that last phrase. My first attempt tore as it drifted downward from my hand, though she quickly mended it to look almost as intended. I got another chance but this time–overly anxious to get it right–plopped the masa round down too quickly and formed some bubbled pocked in the process. She kindly let me have a third try, which 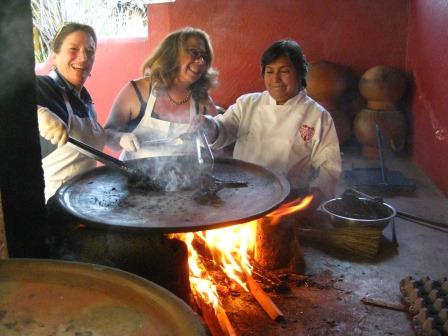 That is one hot and hard-working comal!

was finally the charm, and she seemed as happy about it as me. Partway through our visit some cold beer showed up, which supplied me with a favorite image from the week: the mother of the house, in the corner working the metate, taking a break for a sip now and then. She nodded at me to approach so we could clink our bottle necks together with a friendly smile.

As a food professional, I can simply chronicle the amazing time through the medium I know best. By way of the ingredients I touched and tasted (myriad chiles, masa, fresh cheese, chocolate, tamales, moles and other sauces); the market stalls that inspired with the delicious culinary potential they offered; the hands-on experience we gained from women for whom what they prepare is as much an expression of themselves as any means at their disposal; the completely new-to-me recipes including higaditos (scrambled egg and shredded chicken cooked together in chicken broth) and tejate (a beguiling mix that includes cacao, ground corn, mamay seeds and the fragrant rosita de cacao ground to a paste then expertly blended with water to make a richly flavored drink). The one-of-a-kind pleasure that results from spending hours in the kitchen with friends old and new, then sitting down to a table rich with the tasty products that we’ve created together. 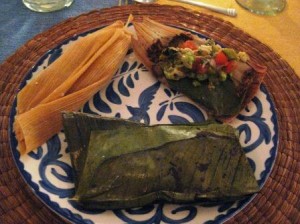 This is my kind of happy meal, three types of tamales made in class that afternoon.

I took a lot of pictures and I took a lot of notes, but I tried to not let that get in the way of simply taking in the glory and joy and delight of the many unique moments strung together last week. This was one of those trips about which I had very little preconception before leaving. I knew of (but very little about) the region’s famed moles. I was aware of Oaxaca’s culinary importance but with very little framework for that designation. On that flimsy framework was built a magnificent week about which I feel I’m only doing meager justice here (not to mention showing just .004% of photos I took)! But as I explore those chiles and the class recipes and attempt to recreate some of the items we saw prepared in those homes of our generous hosts — I hope to make further nods back to that week in Oaxaca and share more of those delights I brought home with me. 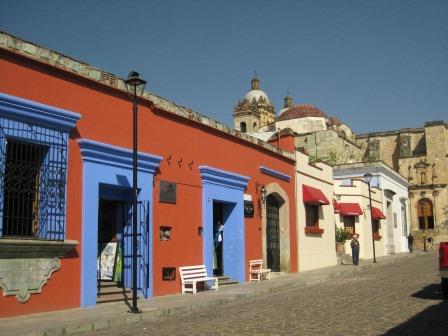