These days more than ever, it’s nice when you can make a dollar spent go farther. If you’re a fan of wild Northwest salmon and have an interest in supporting the livelihoods of the people who work to bring food to your plate, here’s a delicious opportunity for you to do good by eating well. Thursday February 26, Elliott’s Oyster House is hosting a Yukon Salmon Feast to benefit the families where the Yukon River flows, source of those spectacular Yukon salmon.

It’s not what you’d think of as traditional salmon season, but thanks to an unfortunate twist of circumstances (namely economic), salmon is on our radar now. Many people are–rightfully–concerned about the plight of the Yukon  fishing communities nearly 2000 miles from Seattle.  (And you know by now, I hope, that frozen fish is not the antithesis of fresh fish. You can buy “fresh” never-frozen fish that’s pretty awful and you can, likewise, enjoy previously frozen fish that cooks up to be indistinguishable from fresh.)

Elliott’s Oyster House on the Seattle waterfront has stepped up to the plate to help out. All this month, they’ve been donating 25% of every Yukon keta salmon entrée purchase to a fuel fund set up to support the Yup’ik Eskimos in Emmonak, on the Yukon River delta. The most basic necessities have been hard for families to manage in recent months: fuel, heating oil, food. CNN has a detailed item about it here.

A special push of support for that same fund will result from the dinner on  February 26, at which $25 of each attendee’s fee ($65 plus tax & tip) will go to the fuel fund. More information on both here. And you can check out a preview of the menu for the 26th. Call soon, seating’s limited! 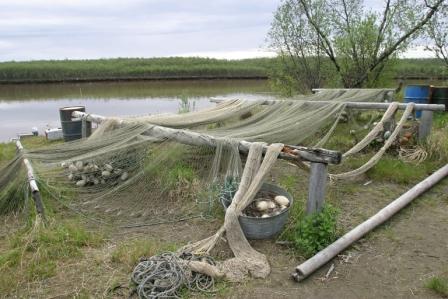 I know there’s no shortage of economic grief to go around these days. And so many fundraising invitations come our way as well. But this is one cause in which I take a particular interest. Because I’ve been to the village Emmonak, traveled to many of their fishing camps, visited other fishing villages in the area. I saw first-hand how remote they are, how incredibly meaningful and important the salmon is to the locals’ lives, how few other economic  resources  they have to draw on.

The business of wild salmon harvest and distribution is a huge and complex subject and I definitely do not profess to have a solid handle on it. I just know what I’ve learned and observed from the travels and research I did while an editor at Simply Seafood magazine, and in years since working on 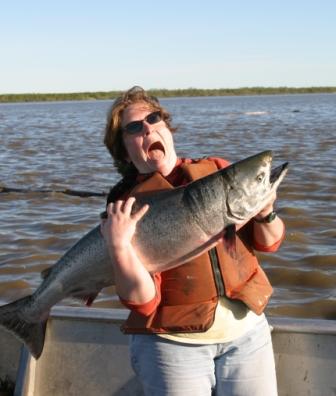 my Salmon cookbook and other projects. My trip to the Yukon River, which thankfully came shortly before my Salmon manuscript was due, was by far the most eye-opening.

My travel partner was great friend, and great photographer, Scott Wellsandt (these photos are all his). Some of his shots showed up in a New York Times article a couple of weeks later, written by Timothy Egan. The article included a photo of me holding a sizable Yukon king, though the shot I include here in the post is an outtake. Is the fish heavy? Yes. But it’s also alive, so I was having a heck of a time holding the monster and not accidentally dropping him back into the river. We were on a skiff with some Department of Fish & Game folks, they were checking their test-nets for a sampling of the salmon traffic to help determine seasonal openings. When people see that photo, they usually ask if I caught the fish, but I cannot tell a lie. I did not.

I thought I knew what “remote” meant; only after that trip did the word’s meaning really sink in. The airplanes got progressively smaller, from Seattle to Anchorage, Anchorage to another lay-over, then on to Emmonak–population 700 or so–in maybe a 16-seater. The only way in or out is by air or by water. ATVs and motor bikes are the key mode of land transport in town (this time of year it’s snowmobiles, of course), a few really beat-up cars puttering around. We heard an awful lot of those ATVs, even to 2:00 in the morning with the sun still brightly shining and the kids thrilled to have extra hours of play. Do they never sleep during summer??

The “hotel” we stayed in was a series of rooms above what amounted to a combination city hall/community center. After checking in that first day, it was maybe 5:00 or so, and we set off to figure out dinner options. We found there was no restaurant in town, just a small counter at the back of the all-purpose mercantile that sold everything from couches to fishing gear to cheerios. And the store closed at 6:00. If we’d been a bit later, we may have had to go door-to-door in search of supper that night! As it was, we splurged 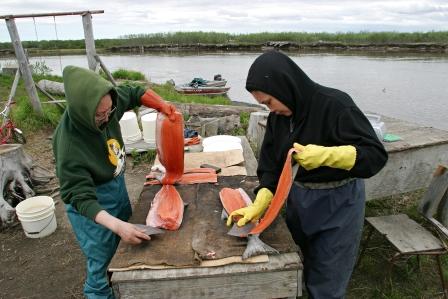 on a couple of frozen dinners and heated them in the hotel room’s microwave, sipping Elijah Craig and watching George Wallace on the TV. It’s one of those snap-shot moments I don’t think I’ll ever forget. (Another memorable moment from that trip was a killer game of cribbage: playing three-handed, I not only beat both opponents but skunked them both as well. Four games ahead in one fell swoop! Boy that was a rush.)

We were there early in June. The commercial season was not due to open for another week or two, but some subsistence fishing was going on.  Over the next few days, we covered a lot of territory, traveling between fish camps to chat with folks, see their set-ups, watch them methodically cleaning, gutting  the fish. We spent most of our time with folks from Kwik’pak, the buyer/processor based there to handle the fish caught by local families during commercial openings.

In those fish camps, we often saw three,  sometimes four, generations together doing the work of the day, mending nets, cleaning fish, tending to smokehouses, whatever needed to be done. Fish they’d caught were being smoked, dried and 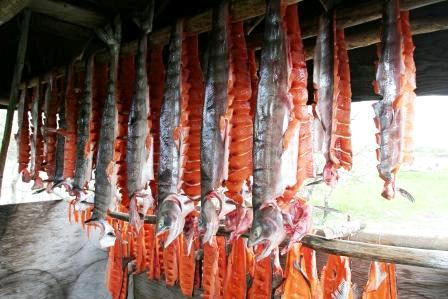 otherwise cured to save for the winter. It was quickly clear that the subsistence fishing is by no means just a traditional ritual the Yup’ik observe. It is a vital means of supporting themselves on the flip side of the calendar, when the river’s long frozen and food provisions are far less easy to come by. I naively assumed that a research trip to the Yukon River while fish were being caught would mean some pretty phenomenal eating opportunities. But it didn’t take long to understand that the freshly-caught fish were far too valuable to just toss on the grill for dinner. We didn’t have one bite of salmon the whole trip, and I didn’t mind one bit. 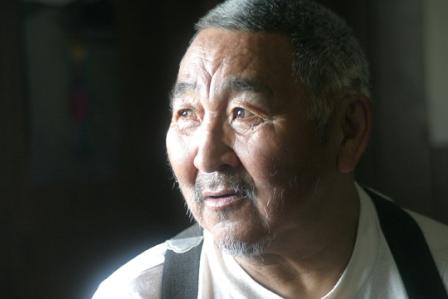 The people were all just wonderful, friendly, serious about the work at hand but quick with a welcoming smile. So generous. It broke my heart when news began spreading about the dire straights they’re in now. Both the subsistence catch and the commercial catch are vitally important to those communities. The former allows them to feed their families in months to come. The latter not only allows us to enjoy the glorious salmon from the Yukon, but provides cash income for the very high cost of living in remote reaches of Alaska. If you’re so moved to lend a hand, pick up your fork and find yourself some Yukon River salmon.