After so many years working in the culinary business, I cannot say how much I relish the incredibly broad, diverse, fascinating, inspiring group of colleagues I’ve had the pleasure to interact with over the years. And it is so very satisfying to cheer them in their accomplishments and milestones, tip a glass in their direction when they get some well-deserved recognition. 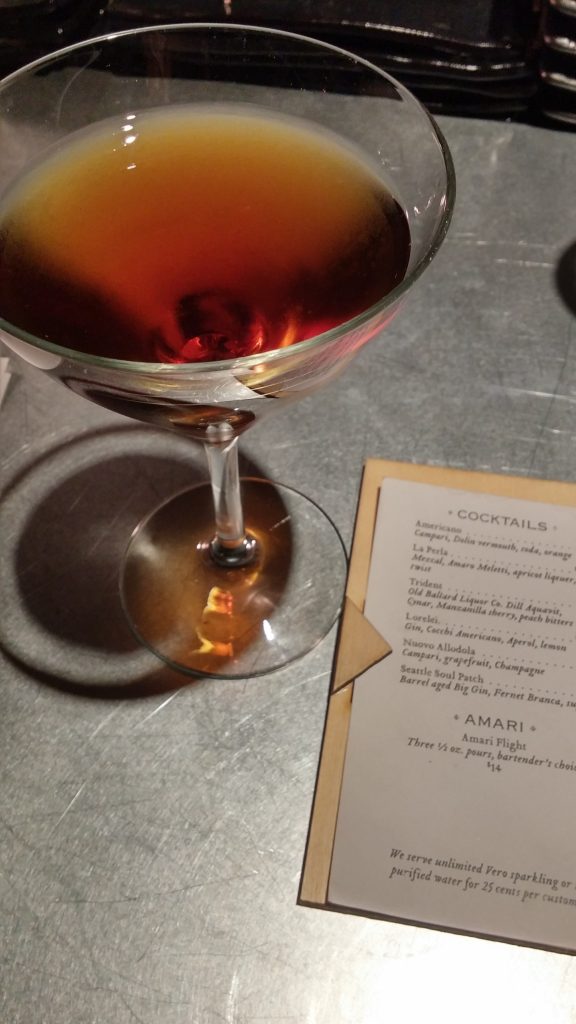 My Trident at Bitter/Raw last year

Such is the case this week when the Friday Seattle Times included a tribute to Robert Hess and one of a great many contributions he’s made to the world of cocktails. Writer Tan Vinh shined the spotlight on a cocktail Robert created that–rather than just becoming legendary among the Seattle-area crowd–has become an international hit.

I was particularly happy that it was this cocktail featured: the Trident. When I’d been deep in research for my Oysters cookbook that came out earlier this year, I was diligent in studying the best ways to enjoy oysters. Which, going that extra mile for my readers, included what to drink with said oysters.

One day I found myself sitting at the charming little raw bar Bitter/Raw on the mezzanine upstairs from Lark. Glancing down their cocktail list, the Trident caught my eye. Wasn’t familiar to me at the time. I’d already had aquavit on radar as a great oyster-friendly spirit. I was intrigued by the use of sherry, not something I usually gravitate to. After my first sip, I was hooked. And I did find the bracing, savory, slightly bitter elements a really great compliment for those briny oysters.

An extraordinary cocktail scholar, Robert launched his site Drink Boy years ago, still a top go-to site for me when I want the low-down on a cocktail. Not only is there a lot of great content there, but links to his The Cocktail Spirit videos, which includes this one that goes into the creation of, and inspiration for, the Trident–a variation on the Negroni.

I was not at all surprised to see mention in the Times piece about Robert’s inclusion in the new book A Proper Drink by the New York Times cocktail writer Robert Simonson. (I happen to have attended a book signing event at the cozy and delightful Amor y Amargo bar in New York City last week and got a copy of that book.) As a food writer with a penchant for spirits and cocktails that I’m thrilled to cover from time to time, Robert has been an invaluable resource for his palate, historical perspectives, food-and-beverage points of view. He may not be a “startender” (just read that term for the first time a few days ago) in the classic sense, with a high-profile platform behind a celebrated bar. But from behind his own bar or wherever you may have a chance to share a drink or a conversation with him, there’s no doubt Robert’s had a huge influence on the cocktail world’s love of, and appreciation for, a well-made cocktail.