The Season of Hops

Hops. Where would beer be without them? They add not only that distinctive floral-citrus-resiny flavor to the hop-heavy ales many 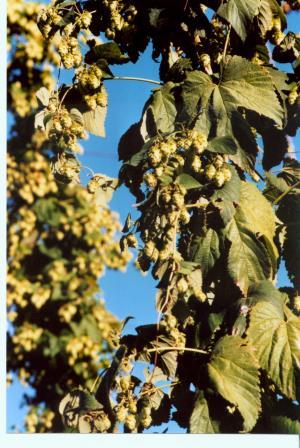 of us in the Northwest love, but as a backbone of the beer-making process they contribute to the characteristic aroma of beer and act as a sort of preservative to help stabilize it against bacteria. (That hopped-up India Pale Ale style of beer is so named because extra hops were added to shipments of beer headed from England to outposts in India, to aid in preserving the beer for its voyage. Necessity as mother of invention, the practical exercise proved to make some extra-tasty beer.)

Those ebullient vines of  humulus lupulus became an unexpected theme this past week or so. First it was seeing a photo (this online version has a few more) in the Seattle Times showing workers gathering hops vines near the end of this season’s harvest in the Yakima Valley, where a large percentage of the nation’s hops are grown. That got me reminiscing about a trip I took there a decade ago with folks from the Washington Brewers Guild, recounted a bit in this post. The mere mention of “hop harvest” brings forth such a strong memory of the aroma captured through open bus windows as we passed alongside the fields. So strong I can almost smell it sitting here at my desk today.

This past weekend, we trekked over the mountains for that little Leavenworth retreat I wrote about in the last post. It was one of the three weekends this month that the already-Bavarian-in-spirit town erupts in Oktoberfest regalia. Many celebrants dressed for the occasion, from authentic lederhosen to cheap lederhosen to T-shirts-of-fake-lederhosen to what-were-they-thinking? (Waldo and one of the Mario Bros. come to mind…). The more authentic garb men wore often included a felted alpine hat, some with a small piece of hop vine tucked in the band. I loved the jaunty, festive look of that, but never got close enough to take in their aroma. And might have been escorted off the property if I had…. 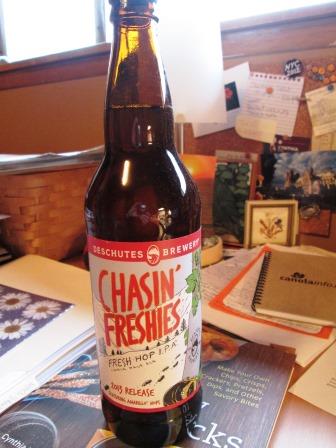 Between those hoppy bookends there was a knock on my door late last week, opened to find a delivery from Deschutes Brewery down in Bend, Oregon. One of my favorite deliveries, as you can imagine, I never know what type of beer will come next (last month’s extra-early-preview of their annual Jubelale was a particular surprise…not quite ready to be thinking about Christmas yet). This batch was all about hops. Their popular Hop Trail Fresh Hop Pale Ale is an annual favorite, featuring freshly-harvested hops that go from field to brew kettle in a matter of hours.

Just in its second release is the Chasin’ Freshies Fresh Hop IPA also in the package. I guess ski bums will get the reference, I needed help deciphering the connection. Ski-town Bend is rife with folks devoted to skiing, the Deschutes web site says of this beer that “like fresh powder, it’s a seize-the-moment thing.” As their names suggest, these two beers are made with just-harvested hops while by far most beers are made with dried hops (natural or in pellet form). The brighter, more vivid flavor of hops definitely comes through in a fresh-hop ale, something hop-heads like me adore.

Both of these beers are made in limited quantities at the height of hop season, available now where you’d find other Deschutes beers and just as long as supplies last (which I hear may be into December). That is, until it’s hop time again next year!