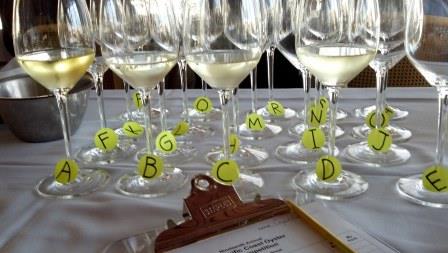 Back home in Seattle at Anthony’s on Shilshole, the beginning line-up of wines to judge

I’ve been in Paris nearly two weeks now and so far only indulged in oysters once. It was at a tiny, bright, delightful little spot in the Latin Quarter that I’d read about in research, Huitrerie Régis. Got there just after doors opened at 6:30 on Saturday evening and scored the best among just about 7 two-tops. Never been to a place with as limited a menu (not counting a hot dog cart), it’s ALL about the oysters, plus shrimp and/or sea urchin when available (only the former, when we were there). A plate of sliced saucisson sec, cheese (one option: goat) and dessert (one option: apple tart). That’s it. And wine. We got one dozen of the fines de claires and one dozen shrimp. A pitcher of Sancerre. Perfect. Simple. As it should be.

But I’ll be slurping at least a couple more oysters in the next couple of weeks, I’m sure. That’s to be inspired by two things. First, the annual judging of the Pacific Coast Oyster Wine Competition, which I did back in Seattle late April just two days before leaving for Paris. And secondly, rereading Ernest Hemingway’s A Moveable Feast, which I started on that LONG plane ride from LAX. The mastermind behind the oyster wine competition, and its annual host, is the inimitable Jon Rowley. He begins each of these final judging sessions with basic overview of the process (don’t smell the wine first; chew each oyster [lovely kumamotos from Taylor Shellfish, one for each of the 20 wines] then sip the wine to see how they work together; don’t overthink it, make your notes and move on….). Then just before we slurp our first candidate he reads the “benediction.” It’s a couple paragraphs that Hemingway wrote in A Moveable Feast about enjoying a plate of oysters and glass of wine together, a passage of text that in fact inspired Jon to develop this competition to celebrate wines that beautifully complement oysters. 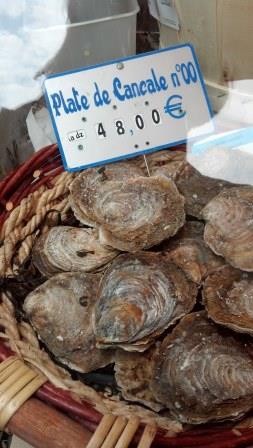 In the case at the celebrated Le Dome in Montparnasse, these among the dearest (read: priciest) oysters I’ve see thus far….

Hemingway doesn’t go into detail about characteristics of the wine he was drinking that made it such a good partner for the oysters. What he does so eloquently say is:

“As I ate the oysters with their strong taste of the sea and their faint metallic taste that the cold wine washed away, leaving only the sea taste and the succulent texture, and as I drank their cold liquid from each shell and washed it down with the crisp taste of the wine, I lost the empty feeling [from having just finished a story] and began to be happy and make plans.”

But Jon’s been pondering and studying that since launching this competition. He smartly doesn’t tell us judges exactly what to look for — instead leaves it at the “bliss factor.” Appropriately subjective reaction we’re going to have individually to the way each wine interacts with each oyster. For me, the second I sense impressions of oak, butteriness, tropical or fruit character, the wine’s on my don’t-bother list. Not only do those attributes not taste good with the oyster’s briny nature, they often simply overwhelm the oyster and clean it right off your palate, which isn’t the point. Bracing acidity, mineral character, bright flavors, crispness and a clean finish are what I find ideal. The wine should complement the oyster and leave you ready for the next, not palate-fatigued.

Among this year’s winners are some repeat  favorites (of both mine and judges as a whole), including Willamette Valley Vineyards 2011 Pinot Gris, Chateau Ste Michelle 2012 Sauvignon Blanc and Geyser Peak 2012 Sauvignon Blanc. (Of course, previous years’ winners include different vintages.) New to me  (but one I really liked and a first-time winner this year) was the Three Pears Pinot Gris from Three Pears down in California. It’s always a fascinating experience. And it’s hard, once we have flip that switch to go into judging mode, to not also be sizing up each of the oysters as well. They’re all fabulous, but when you start being more aware of what you’re eating and drinking, rather than just mindlessly and robotically consuming, it’s quite eye-opening the distinct and delightful things that happen on our palates. This one’s a bit sweeter, this one a tough more briny, yet another extra metallic. 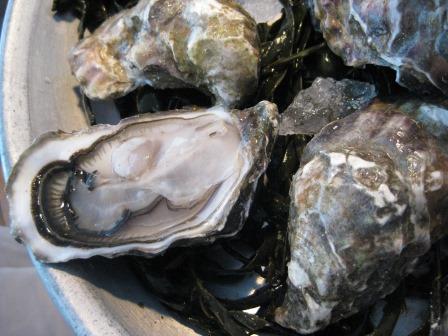 Some of the fines de claires at Huitrerie Régis

So, not only does this judging process lead to the crowning of ten wines from the Pacific Coast deemed to be the year’s best partners for oysters, but for we judges it’s also a vivid lesson in the beauty that comes from focusing our attention on the simplest, purest and most basic of things. Like a crisp, briny oyster and a crisp, bright wine that makes it shine.