When Zilch is Good

Zilch,  the fun-to-say synonym for “nothing,” is usually something we look to avoid. “How many fish did you catch today, Phil?” “Zilch.” Or….. “How many offers on your EBay post for that 1972 Carpenter’s album?” “Well, zilch.”

Unless your MO is deep serenity and oneness with the world, when the only subject you want to occupy your thoughts with is that of nothing, zilch is not the most popular of concepts.

But I feel a little differently about zilch. Because my early years were formed on equating zilch with a good time. It’s the name of a dice game I’ve played hundreds of times over the years. It goes by many names, including Farkel, 10000, Greed and Keepers. And it’s a game that’s been around for a good while. The go-to board game resource I found while writing Gourmet Game Night, BoardGameGeek, cites its first publication date as 1492 (which makes me 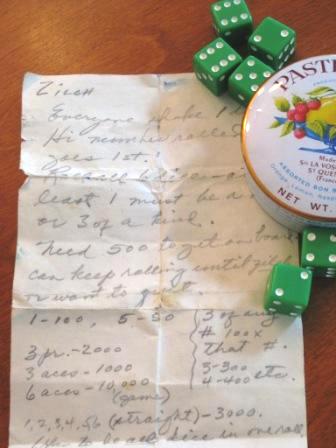 wonder if Columbus and his cohorts didn’t play the game on deck of the Santa Maria…it could have happened!!).

Having stood the test of time, you can imagine that Zilch is an easy-to-like game that pretty much anyone can enjoy. I realize there are a couple of other long-standing games that you might not say the same thing about. Checkers is, in my own opinion, something of a, well, two-dimensional game. You go through a lot of similar motions each round, I’ve never sensed a lot of excitement or surprise with checkers (with all due respect to any checkers champions of great skill and mastery who might be reading this post). Chess really isn’t for me, either. I completely understand the degree to which the game captivates its fans and why that would be the case. I just prefer a bit less intensive brain-power to be involved in playing games. A little chill time for the grey cells is part of what I love about games.

But Zilch sits somewhere right in the middle. The chance of the dice, plus a bit of strategy but not too much. Easy to learn. Easy to like. And easy to get addicted to.

So there we were a month ago, about to leave on a week-long vacation with two other couples. We had a house for that week, so were going to really settle in and do a lot of relaxing. No question that games would be part of the scenario! I grabbed a few travel-friendly things, like a deck of cards, a travel cribbage board, Yahtzee sheets. And the tin of dice. This tin of dice that you see in the picture. Inside are six green dice. But also that scrap of paper covered with my mom’s distinctive handwriting. My mom’s not around any more, but every time I come across something she’d written, it gives me a wonderful moment of comfort. It happened a few months ago, moving office furniture. A Paris postcard had fallen behind a bookcase, not one mailed but just a memento from a visit my mother made while I was living there. On the back were notes she’d written about the meal we’d had at the restaurant pictured on the front. A flood of delicious memories came back and it felt like a brief reunion with my dear mother.

Back to the game, it may be humble but that little tin that once held my mom’s favorite fruit -flavored hard candies now holds a wealth of childhood memories in addition to one of my favorite games. All you need is six dice and a piece of paper for keeping score. If you buy a Zilch or Farkel game at a store, it’ll come with fancy little canisters in which to shake the dice, but I don’t go for that folderol. Just shake, rattle and roll!

The first player (highest roller, closest birthday, however you choose….) rolls all six dice. From those dice, she’ll choose at least one of the “pay” die (see below)  and set that aside to start her pool of accumulated points for that turn. She’ll roll the remaining dice and again set aside the pay dice of choice and continue. Or not. The strategy for Zilch is to accumulate points, of course. But you’ll lose ALL the points accumulated on a turn if your toss of the dice turns up no pay die at all. The points you earn that turn? You got it: zilch.

The trick is that to get on the scorecard for the first time, you need to have at least 500 points. So at the start it pays to play loosely and just keep rolling until you get that many points. And on any turn during which you end up with pay points from all six dice, you can pick up the dice and start again, adding points to the base earned from the first six. There may be times when you want to risk it instead of playing safe and keep rolling even when you’ve got just one or two dice left.

See? Pretty easy. The win goes to the player who first reaches, or surpasses, 10,000 points. On vacation we played a bit of Yahtzee, some gin rummy, but it was Zilch that really won over my travel mates. We played it for many hours that week, even taking the dice to our favorite haunt Poe’s Tavern to play over beer and burgers one evening. It was not only fun in general, but gave me a bit of extra joy to share with my friends the game that brings back such great family memories for me.

Here’s how you get those points*:

*It’s important to note that all of those points are based only on the results of a single roll. If you rolled one 1 on a turn and two 1s on the next turn, that’s just 300 points, not 1000.