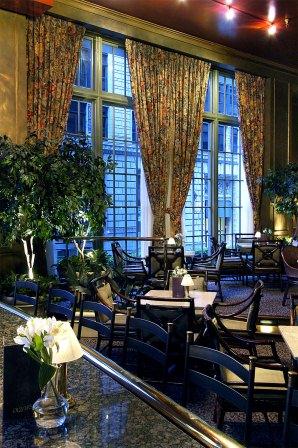 OK, so yes, it is just about 9:00 in the morning as I start writing this. And yes, it’s true, I do have an icy, well-shaken martini on my mind. But not because I’m blurring the lines between “breakfast hour” and “cocktail hour.” But because I’m thinking about that really outstanding, well-crafted martini (or two) I’ll be sipping tomorrow evening at Oliver’s in downtown Seattle at the Mayflower Park Hotel.

Seattle, as you may well know, is no slacker in the quality cocktail department. Most anyone who’s graduated from cosmos to negronis has heard of Murray Stenson, the city’s most celebrated cocktail creator. In fact, Stenson last year was named the Best Bartender in America by his cocktail-shaking peers at the annual Tales of the Cocktail gathering in New Orleans. ZigZag, where Stenson until very recently had held court for years, has been on countless lists both local and national as one of the top cocktail destinations in town. (Since the very recent kerfuffle about Stenson leaving ZigZag to go to the brand-new RN47, and then not, and then, well, maybe, yes, but not right away…. I’m not sure where Stenson’s next going to be shaking things up!!) GQ magazine deemed Tavern Law one of the best 25 bars in the country, Sambar made the cut for Esquire’s Best Bars in America issue this year, other Seattle bars get pings of recognition from the national cocktail cognascenti

But before there was Tavern Law, before there was Licorous and Sun Liquor and Bathtub Gin — there was Oliver’s. On a prime corner in downtown Seattle, with sweeping tall windows offering a bustling urban view, bartenders have been shaking up some of the city’s best cocktails for 35 years. And that’s why I’m imagining that frosty martini I’ll be sipping tomorrow night, attending the birthday festivities at Oliver’s.

I’ve got a soft spot for Oliver’s not only because they make such a damn fine classic martini–always my staple go-to (with gin, of course, why do you ask?!). For 4 or 5 years, I was lucky enough to be a judge for the Annual Martini Classic Challenge which was founded by Mayflower Park Hotel as a way to celebrate the craft of a well-made martini. Oh, and yes, it was one of those dreamy, fun assignments, one of those kinda glamorous things that I think some folks imagine we food-and-beverage writers are doing ALL the time! Zipping around from one great meal, one exquisite cocktail to the next, living the high life, sitting down to our computers to effortlessly recount one experience before moving on to the next….. Oh, but were it so!

We, the panel of judges, would be driven between four different bars participating each year–among them over various years were The Hunt Club, the Garden Court at the then-Four Seasons (now Fairmont) Olympic, the Metropolitan Grill, Earth & Ocean, Stars, always wrapping up with martinis at Oliver’s. Each bar presented us with a classic martini and a specialty “martini” (any concoction based on gin or vodka) from which we sipped judiciously and judged them for both presentation and taste. The first martini challenge was in the early 1990s, 1992 I think. I joined the fun in the mid-1990s, and was still on board when the competition went international. In 1999, we hopped the border to judge bars in Vancouver, BC, one evening, back down to Seattle for judging the next night. So fun to be steeped in intensive cocktail culture for the weekend. The cocktail part was always taken very seriously, the judging no boondoggle. But of course we had fun hopping in and out of limos, sipping outstanding spirits, and reveled in the creative spirit of the competition. I’ll never forget the “Queen” (in drag) who hosted the presentation of cocktails at Delilah’s up in Vancouver. S/he pulled a small spray bottle from her dainty handbag and proceeded to mist our glasses with the ideal dose of vermouth, expounding on the virtues of the perfect proportions of vermouth to gin.

Alas, the cocktail challenge saw its last cocktail shaker filled with ice, gin and just a whisper of vermouth in 2001. But it sure was a fun decade or so of sampling–and celebrating–cocktail culture (particularly martini culture) in Seattle and our beloved accomplice to the north, Vancouver.

So tomorrow evening I’ll be down at those birthday festivities lifting an ice-cold martini to toast not only Oliver’s 35th anniversary, but also to thank them for helping this city appreciate the beauty and simplicity of a perfectly crafted, unembellished martini.