That may be a stretch. It’s not like I have a permanent gig or anything, but this is a change from the more regional snippets I’ve done for television in the past. I’ve got a small supporting role in episide 33 “The Inventors,” part of the second season of Gourmet’s Diary of a Foodie, which airs on many PBS stations across the country. (The photo here comes courtesy of Zero Point Zero Production, Inc., 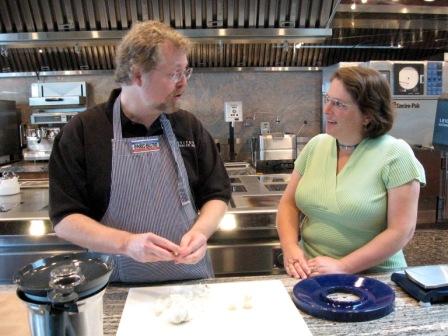 which produced the episode.) I play something of the journalist sidekick to high tech guru  Nathan Myhrvold–a former Microsoft exec who’s passions lean toward innovation and invention, often blended with his love of cooking–as he shows off some of the state-of-the-art tools in his amazing kitchen. It was quite an honor to be asked to participate, and such a thrill to work alongside Nathan in his phenomenal kitchen.

I haven’t seen the episode yet myself (it’s not scheduled to air in Seattle for a bit), but a longtime family friend in Spokane called to say she’d seen it and gave a thumbs up. Depending on where you live, it may or may not be airing soon. You can see a quick preview of the show on the very cool revamped Gourmet web site (which currently includes a “first look” at the new Pike Street Fish Fry in Seattle, by writer pal Matthew Amster-Burton).

A couple of my favorite shows include the “H2O” episode which features good friend Jon Rowley out at the shore under a cold gray sky talking oysters. And the Raising the Bar show, not surprisingly, piqued my interest with innovators in the realm of cocktails, including some time with the cool Scott Beattie at Cyrus restaurant in the town of Healdsburg in Sonoma Valley.

Check out any of the episodes that you come across from this season or last, if you haven’t seen Diary before. Each episode follows a particular theme and visits with a few specialists to build meat around the bones of the theme. While these may occasionally be familiar faces of certain renown, more often than not the experts are from well outside mainstream channels, and from around the globe, which is refreshing. And we invariably end up back in the Gourmet magazine kitchens, where one of the editors–sometimes Ruth Reichl herself–offers an at-home recipe or tidbit to take away from the episode.