Smith Tea: Return of an Icon

Welcome back, Mr. Smith! I was wondering what had come of you…..

About this time last year I was working on a feature article for Horizon Airlines Magazine recounting the lives and times of Northwest tea companies. It’s a story impossible to tell without the name of Steven Smith coming up. The one-time manager of the first natural foods store in Portland went on to co-found two powerhouse tea companies: Stash (1972) and Tazo (1994).  He’d moved on from both businesses by the time I was doing research (Stash was sold in 1993; Starbucks purchased Tazo in 1999, but Smith stayed on until 2006), though  I read plenty of historical perspective on his work at Stash and Tazo and found a great radio interview online (the link for which seems to have died).  The best I could do in terms of learning where Smith was at that moment in 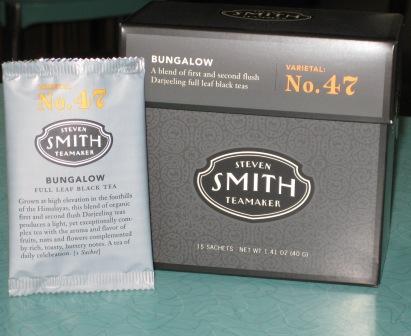 time, however, was the speculation of “somewhere in the south of France” from one of the tea folks I spoke with.

So what appeared on my front porch this week but a small box from Portland announcing the return of Steven Smith to the world of Northwest tea, with a couple lovely boxes of tea to boot. Back home in Portland, he’s once again scouring the world for the very best tea resources and crafting wonderful blends.

Smith Teamaker represents a core mission of “developing a tea line where I can take people as close to the ingredients’ origin as possible,” Smith explains in the press release. Twelve signature teas launched the enterprise (though many more show on the Web site), each blended in small batches with careful attention to the exact provenance of individual teas incorporated in each blend. To the degree that inputting the batch number found on the bottom of the tea box into the “Batch No. Lookup” spot on the home page brings up specific details of that box’s components. 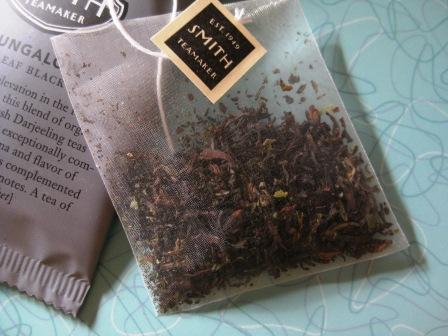 Based on the panache of the packaging and the pedigree of the founder, I instinctively reached for the fine mesh tea strainer I was going to use to brew a sample cup. Loose-leaf is the purist’s path to a perfect cup of tea, right? (I’m saying that as a coffee drinker, mind you, as in “I think I heard that once…”) Surprised was I to find the teas in these boxes come in individually sealed sachets. I had to laugh when I read this clarification on the side of the box: “Our roomy, relaxed fit [!!] sachet encourages greater full leaf expansion to give you better flavor.” So apparently it’s the best of both worlds–loose leaf tea that just happens to be corralled in a tidy pouch of delicate mesh.

The Northwest is well blessed with outstanding tea purveyors (Remedy Teas, T, Barnes & Watson among them), not to mention a wealth of interesting, varied tea shops and salons in which to enjoy them. So did we need one more elegant, selective, high-end tea to now make those choices tougher? Well, perhaps not “need” exactly. But I do think the region surely benefits by having one of the industry’s gurus return to the fold, helping ensure the Northwest remains the envy of tea lovers everywhere.