One thing that never ceases to amaze me is the passage of time. You’d think I’d get used to it at some point, but I never do. I often joke in an overdue email reply to someone that “I blinked twice and a week went by!” Honestly, it does feel that way sometimes.

Last week my husband and I were talking about something that happened in 2000 and I was stunned by the realization that the turn of the millennium was over ten years ago already! Remember when Y2K seemed to be the thing that was going to bring the world to its knees? It seems like such a simplistic, naive concern now.

So I shouldn’t be surprised by the fact that I was surprised to hear that Le Gourmand is celebrating its 25th year. Chef and owner Bruce Naftaly called recently to share the news with me. Twenty five years in that charming, nondescript brick building that everyone rushes by making their way down the hill from Fremont into Ballard. It’s like a century in restaurant-years. And it’s a milestone made only more notable because of the oddly low profile Le Gourmand has held in town. Bruce is happiest in the kitchen. Though he surely enjoys making the rounds in the dining room to chat with guests but even then he seems a tad out of his element. He rarely makes appearances at the usual chef-o-rama grazing events. I was thrilled when he agreed to be one of the chefs that joined the celebration of the 2001 release of the Best Places Seattle Cookbook I did with Kathy Casey. He contributed a few recipes to the book, including my introduction to cooking with shiso leaves by way of his Savory Nectarine and Shiso Soup.

Bruce only launched the restaurant’s web site in this past year or so, and sheepishly admitted that he’d recently gotten himself a cell phone. He certainly doesn’t blog or tweet or otherwise go out of his way to trumpet his restaurant. Every year or so I get a phone call from him with some bit of news he’d like to share. It’s his very understated way of keeping me–and surely some other writers in town–in the loop and keep Le Gourmand on their minds.

All that to say that you kind of have to seek out Le Gourmand. It employs the “whisper” method of making itself known. I imagine many people know it as “that restaurant alongside Sambar,” the wonderful cocktail destination that Bruce and his wife Sara added about six years ago. Which is maybe not a bad thing! Hopefully some of them will slip through that doorway and treat themselves to the riches of dinner at Le Gourmand one day.

Maybe  just the motivation they–and anyone who hasn’t been to Le Gourmand, or hasn’t been recently–need is the 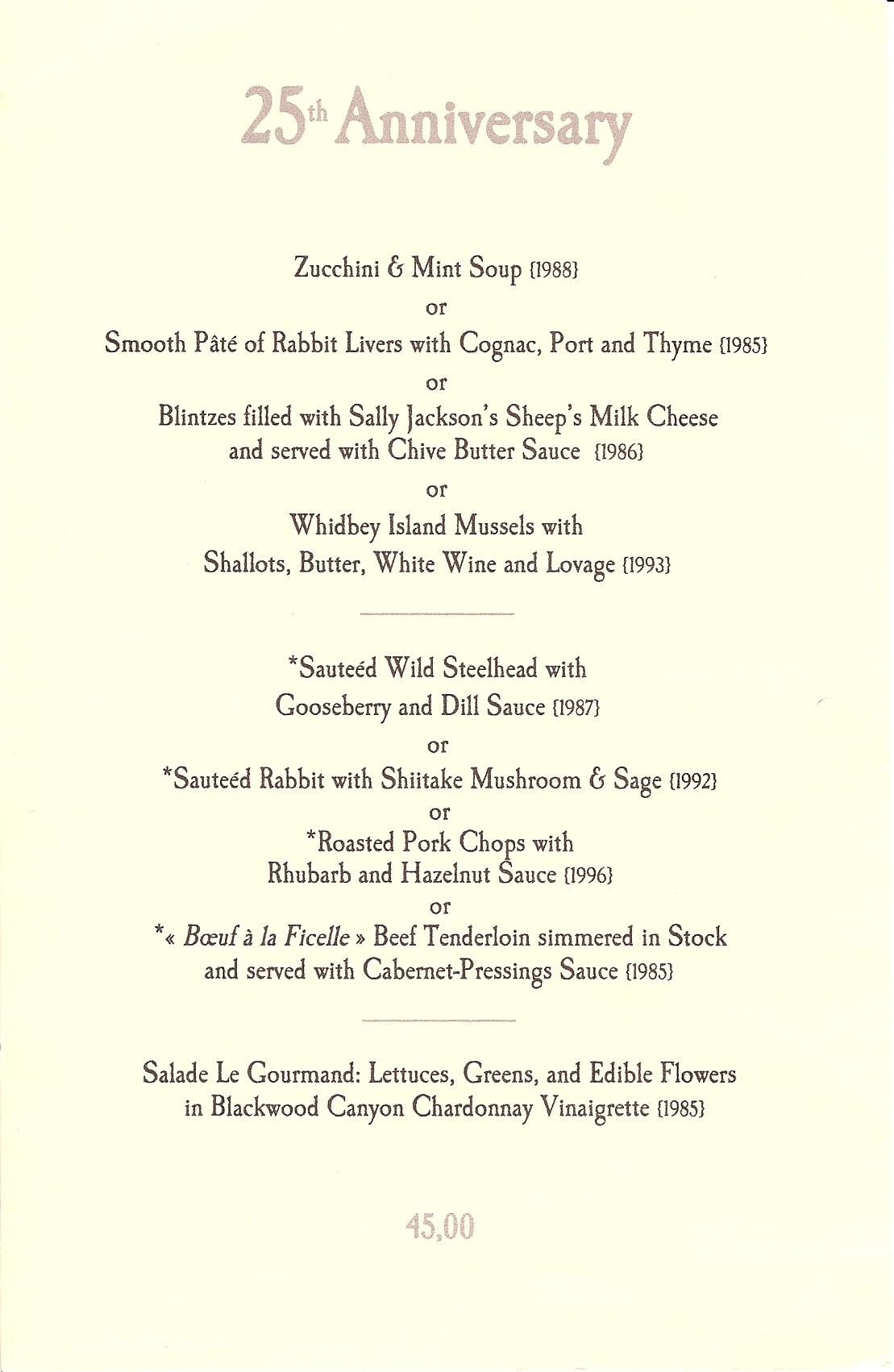 25th anniversary menu that’s available now. And based on what Bruce told me, should be available at least through the summer. For the first-timers, the menu is a great introduction to the restaurant, offering as it does dishes from the LG hall of fame, some of which were on the menu in the first year. Dishes that have been foundations of the restaurant over the years. Rabbit liver pâté (which he used to serve with housemade poppy seed crackers, the seeds collected from garden poppies). Blintzes filled with Sally Jackson sheep’s milk cheese. Boeuf à la ficelle with cabernet-pressings sauce. And of course, ending with the salade in true French style, mixed lettuces with a colorful scattering of edible flowers in a pitch-perfect vinaigrette.

Bruce’s call was inspiration enough to get me and my husband back there for dinner last week. Though we couldn’t limit ourselves to the 3 courses of that anniversary selection, instead opting for the seasonal 7-course tasting menu. Which means returning another time for the Whidbey Island mussels with lovage and steelhead with gooseberry and dill sauce. Instead, we sipped at a fascinating and delicious radish and rose soup. Tucked into seared foie gras with aprium and yuzu leaf sauce. Relished a ragout of morels and asparagus. Devoured steelhead wrapped in fig leaf (from their garden) in a vin de noix sauce. And, heaven help us (a generous menu!), beef tenderloin with housemade jowl bacon, cèpes, and crispy spaetzle. The latter course served, in quintessential Le Gourmand style, with a pretty side dish of buttery baby red potatoes, kale, and cabbage. Salad was all the dessert we needed after that feast. Delicious.

I suppose it’s pretty obvious by now. I love Le Gourmand. Enough so that I deemed it to be worthy of nod as the “millenial Seattle restaurant” that I covered in the December 1999 issue of Seattle Magazine, an honor I got to bestow not long after starting my stretch there as food editor. A couple small changes since then. Where once a garden plot rested at the south edge of the restaurant, that’s now where contented cocktailers sip their Vespers and Sangue Amaros on the garden patio of Sambar. And the once French-garden colorscape of pinks and greens of Le Gourmand’s interior has given way to bold white walls and whimsical marionettes.

Otherwise Le Gourmand is the same gem is has always been. Ridden the waves of booms and busts and restaurant trends that come and go. “Naftaly has every reason to be proud of what he creates at Le Gourmand,” I wrote back in 1999, “and the significant role he has played in defining what it means to eat locally and eat well in Seattle.” With another ten years under his belt, to me that still very much holds true. As does Bruce hold true to what matters to him most. His kitchen, his garden, seasonal foods, local producers. His family, his customers. His cooking.