It took me a while, watching the first episode of a new series from Netflix, to realize that the illustrator being profiled was one I’d heard on NPR a few months ago. I don’t know about you, but I’m drawn like a moth to flame when I hear creative people talk about what goes into their craft, preferably when it touches on the real blood, sweat and tears of the process. Whatever arena, it doesn’t really matter. I create stories to fill a blank page, others dream up buildings to fill a city block. It’s all tapping whatever resources we have available to ourselves in order to generate something where there once was nothing.

This penchant to explore the creative mind was driven home when I came to my blog page just now only to find a forgotten draft of a post about that Christoph Niemann interview. He has a new book out, so of course there was talk of that newsworthy hook. But the ensuing reflections on the sources of creative impulses–the real hard work that creativity requires–stole the show. Particularly the honest truth of the fact that the best work we creative types can produce often requires embracing discomfort. Well, maybe not embrace exactly. But at least accept, not run away from, come to terms with.

Niemann happened to be the first of eight design iconoclasts featured on Abstract: The Art of Design recently released by Netflix. His episode drew my in to the series particularly strongly, in part because some of his work appears in print media, akin to my stomping ground (if at a completely different level….). When I saw that the next episode would feature a shoe designer, I though to myself, “meh, well that was fun while it lasted, what else is in my queue?”

I ended up giving shoe design the benefit of the doubt, and have since explored some extraordinary creative visions behind stage design, architecture, graphic design, even car design. Fascinating and (almost) completely unrelatable. Except for those critical grains of truth shared about the struggles all creative types go through–whether icon in their field or food writer sitting at her desk in Seattle. Finding inspiration, dealing with critics, gaining support for new (sometimes outlandish) ideas, honoring tradition while forging new territory, the tug between business and creativity, staying fresh. Clearly, universal themes abound in the creative world.

One thing I was struck by through the episodes is how often the concept of “story” is expressed. Not that it’s new to think of a story being told somewhere besides a printed page. (I sat in on a day-long symposium for the seafood industry not long ago and only wish I’d thought to keep track of how many times the word “story” was used.) Lord knows there are plenty of shoes, buildings and cars being made with little or no interest in a narrative message being portrayed. But those that do clearly stand out from the crowd.

It’s hard for me to judge if my love of learning what makes creative people tick is because I work in a creative field myself. Will EMTs and deli owners and aerospace executives find a series like this equally 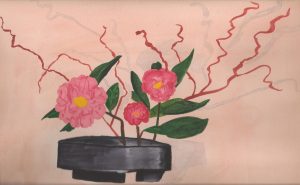 Playing with creativity well outside my comfort zone: an assignment from a watercolor class I took years ago. Just because.

compelling? I believe so. The more I think about it, the more it seems that creativity and a capacity to appreciate elevated design can be found in all walks of life. Abstract provides wonderful insights that are couched in design but apply to life in a range of facets.

Riffing on the reference above to the discomfort Niemann mentioned relative to the creative process, I can’t help but mention another compelling source on the subject of creativity. In Geography of Genius, the title moniker is that more exceptional term “genius,” though throughout the book the term “creativity” seemed to be used at least as frequently (to the point of almost interchangeably). There’s a lot I enjoyed about that book, which I won’t go into here. It makes a quick cameo simply since its pages echo the idea that it is often hardship of one kind or another that proves to be the catalyst for creating new innovations. Creativity is rarely a tidy process and requires quite a lot of plain old hard work, not the least of which to overcome obstacles along the way.

It’s great perspective for any and all creative types to take to heart. I’m not sure how true it is that misery loves company, but it is comforting to realize how ubiquitous the challenges of sustaining creativity can be.