Hmmmm, such a dilemma it was. Toward the end of dinner last night, someone at my table asked which of the four 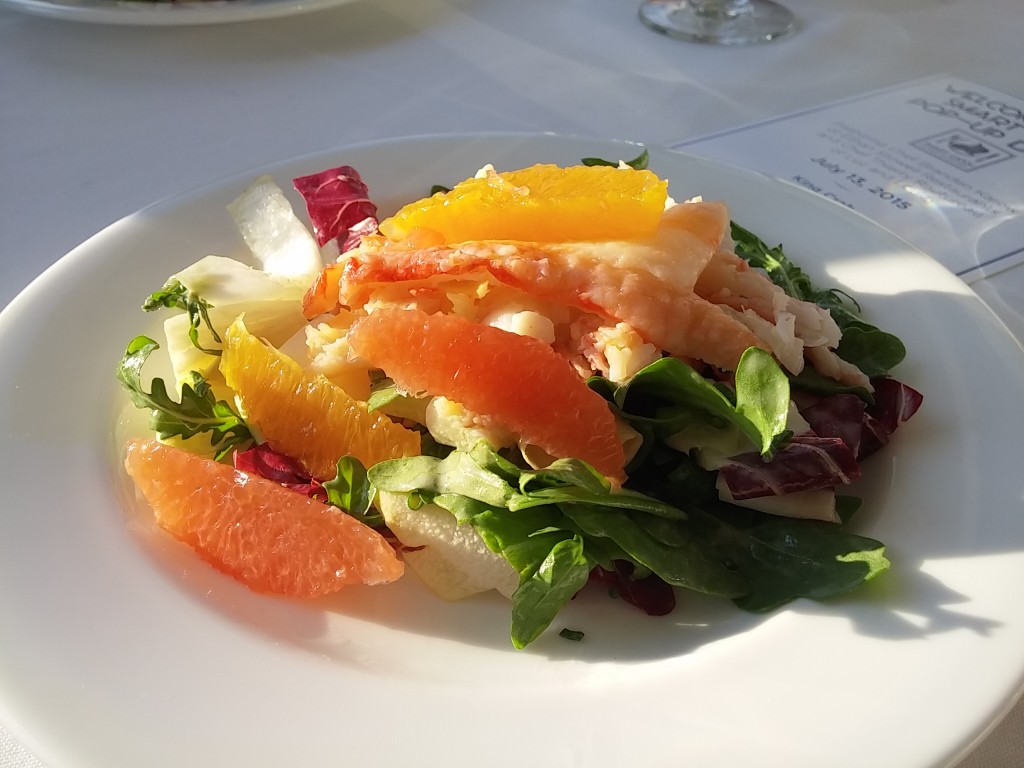 outstanding seafood dishes we’d just eaten was our favorite. How to choose? Particularly with chefs the likes of Thierry Rautureau (Luc & Loulay) and Branden Karow (Culinary Director with Ethan Stowell Restaurants, who I first met when he cooked with Thierry at Rover’s) taking care of things. Chum salmon mousse tartine with goat cheese, grilled sockeye salmon with corn pudding, cherries & fried rosemary, baked Pacific cod with gremolata, peas & farro. But in the end, I think the first course remained my favorite: the king crab on a salad of bitter greens (arugula, endive, radicchio) with slivers of orange and grapefruit.

It was an evening of eating well, but with a distinct purpose: introducing us to Smart Catch, a new initiative to help diners support restaurants that make smart, sustainable seafood choices. This dinner was the second of four consecutive nights of pop-ups featuring nine Seattle chefs showcasing a range of seafoods that represent some of the best choices available.

If you’ve had your radar out at all relative to the subject of sustainable seafood, you’ve likely heard of the Monterey Bay Aquarium’s Seafood Watch program (and may have even downloaded their app). Its green-, yellow- and red-light judgments on fish and shellfish have helped many seafood lovers cook and eat with a clear conscience. In Canada, you can turn to the Oceanwise overview to help make good seafood choices.  The more we hear about overfishing, habitat degradation caused by commercial fishing, harm to other species caught unintentionally (“by-catch”) and other challenges to some of the seafoods we love, the more we want to make efforts to avoid 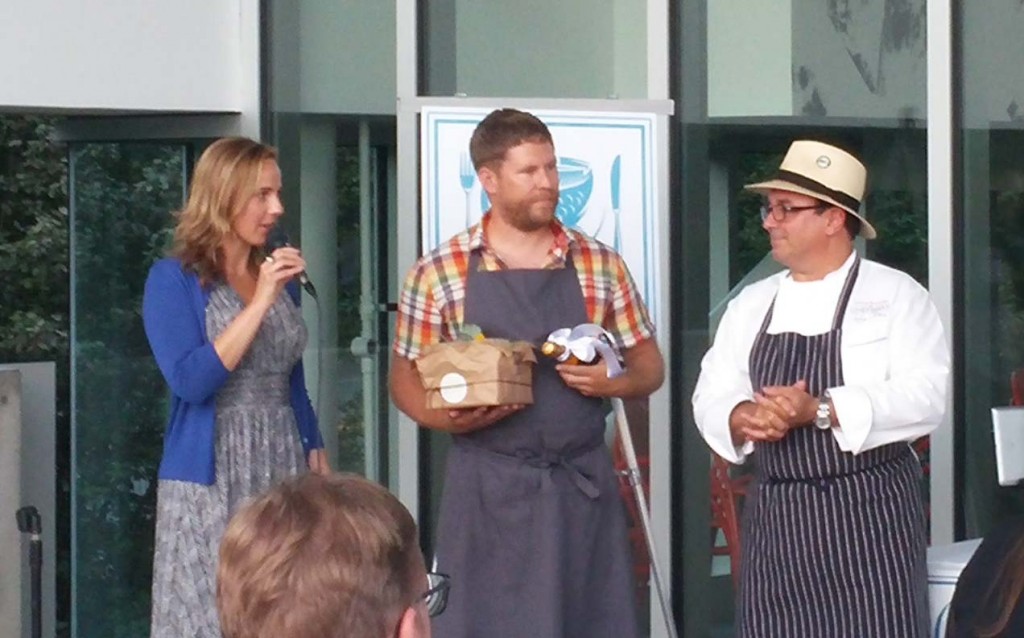 contributing to the problem by consuming less-than-sustainable species. It’s a big help that tools such as these are available.

The trick is that sustainability is a complex issue, rarely with black and white demarcations between good and bad. Few species fall solidly in one camp or the other, because it’s not just the type of fish or shellfish in question, but where, how and sometimes even when it was caught that ultimately determine if what’s on your plate comes with environmental baggage or not. You might be sitting in a restaurant and see rockfish on the menu, have a look at Seafood Watch app and decide to have a steak instead. There are lots of rockfish that range from green to red and the menu doesn’t help you know which category its offering falls in. Sure you could ask the server who, in a perfect world, will either know the species and/or where it came from, or will check with the kitchen to find out. Which is great. But the gal cooking the fish may not even know, and the one who bought the fish may not know or care too much about its sustainability status in the first place.

Enter a surprising (to me, at least) advocate to help us restaurant diners order seafood with confidence: Paul Allen. I 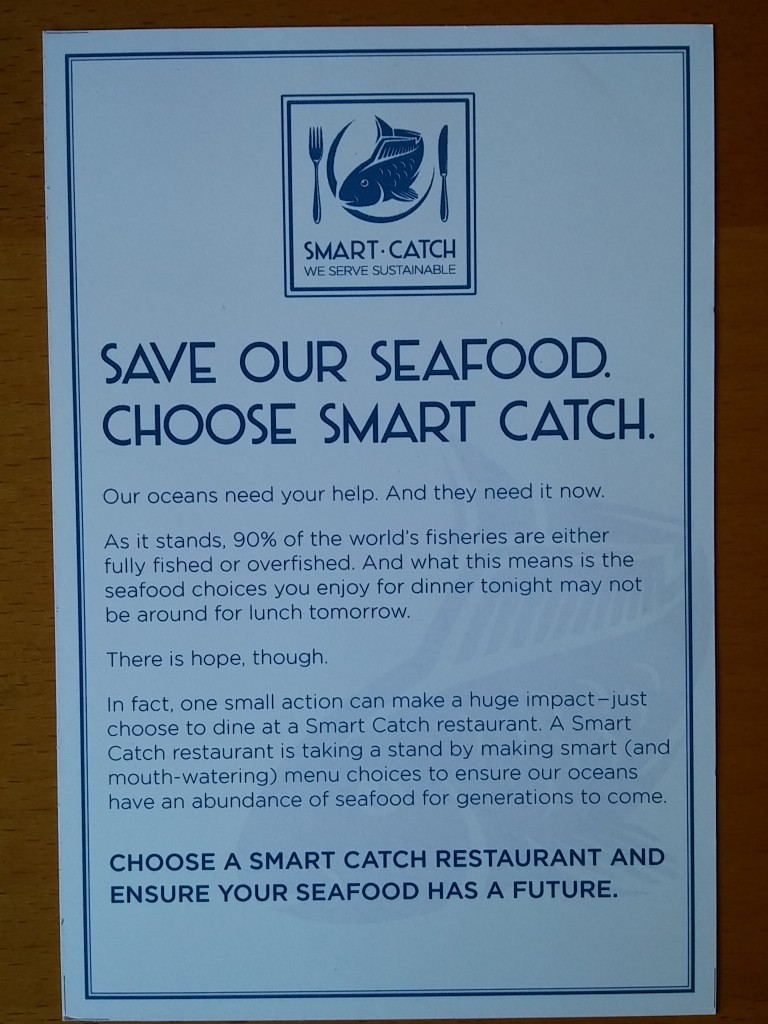 knew the Microsoft c0-founder was keeping busy with a wide range of interests, from the Seattle Seahawks to space exploration. I just didn’t realize until last week that preserving healthy stocks of seafood for future generations was on his agenda as well. But he and his team at Vulcan have just launched Smart Catch, a program that vets restaurants’ menu offerings and their seafood purchasing practices to recognize those who commit to serving sustainable seafoods. It strives to eliminate the need for us to navigate a menu item by item and wonder if those shrimp are from Southeast Asia (often a no-no) or how the swordfish was caught (longline or harpoon from Hawaii = good, drift gillnet from South America = bad, two of a couple dozen classifications for that one fish alone).

Out of the gate for this pilot launch in Seattle there are over three dozen restaurants on board, with the list surely growing quickly. Before long, it’ll take a glance for the Smart Catch logo as you enter the restaurant to know that you can put away your sustainability guides and order seafood to your heart’s content. Program participants commit to 90 percent sustainability compliance (with menu review every six months to ensure ongoing compliance), those who achieve 100 percent sustainable sourcing will get an extra-special sticker to reflect it.

It’s a program just in its infancy. In Seattle alone the team will be busy establishing partner restaurants and beginning that cycle of on-going review. Not to mention simply keeping themselves continually up to date on changes–for better or worse–in the world of commercial fishing and aquaculture. Branching the program out to other cities would be a natural progression, though I don’t know how soon that’s likely to happen. One step at a time is a good way to grow, but based on my first impressions of Smart Catch they’re off to a great start.