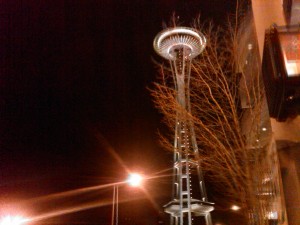 launch of Check Please!, to be exact) and had a short walk from there to a dinner date downtown. Somewhere around 4th and Denny I saw a few tourists on the street corner, pointing their cameras up over my right shoulder. I turned to look and saw the Needle brightly lit, against a clear, dusky Seattle spring evening sky. I relished the moment of being reminded what a distinctive icon that is, not only in terms of how visually striking it is, but in terms of the benchmark turning point in Seattle’s history the landmark helps represent. And I snapped this shot on my phone, just as a reminder.

The Space Needle, having been built as the centerpiece for the 1962 World’s Fair held in Seattle summer of that year, is a cornerstone in the city’s celebration this summer of the golden anniversary of the Fair. There’s is a calendar full of events taking place at the center to help honor the 50-year milestone. Plus a mini museum of sorts on the old Fun Forest property where memorabilia from the fair is on display through October.

Earlier this month I had occasion to return to the Space Needle, this time taking the elevator all the way to the 500-foot level where the restaurant has been slowly spinning for half a century now. The event was a kick-off of a special retrospective dinner created in honor of the anniversary festivities. The folks at the Space Needle called on five iconic Seattle chefs to each 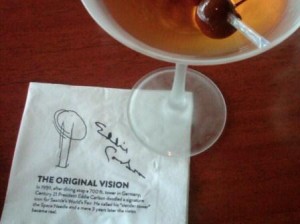 represent one of the restaurant’s five decades of operation. And the five dishes together comprise the celebratory tasting menu that’s available through the rest of this month — and who knows, it may show up again later this year. Though there is a commemorative 50-Year Manhattan that will be on the drinks menu throughout the summer and into fall. Riffing on the popular trend of barrel-aging cocktails, this is a blend of Headlong White Dog whiskey from Woodinville, outstanding Antica Carpana sweet vermouth, Clear Creek apple brandy (from one of my all-time favorite distillers down in Portland), Regan’s orange bitters — all with that special Space Needle touch of having not only been barrel-aged for 50 days, but the concoction is barrel aged at this 500-foot perch. It was a mighty tasty cocktail, served on a clever napkin with a depiction of Space Needle visionary Eddie Carlson’s original sketch of what he envisioned for the centerpiece of the world’s fair.

SkyCity’s own executive chef represents the 1960s on the anniversary menu, kicking things off with Dungeness crab “en brochette,” wrapped in bacon and served with a tarrago emulsion. Beloved sushi master Shiro Sashiba from Shiro’s next presents Poke Belltown for the 1970s element, followed by a contribution from Kathy Casey for the 1980s dish. She was chef at the since-shuttered Fullers restaurant downtown in the 1980s, and contributed a warm spinach salad that she says was a perennial favorite at the time. It comes complete with smoked duck, shiitake and enoki mushrooms, sesame dressing and wasabi-goat cheese — all ingredients that were particularly popular at the time. Next up is beloved Seattle chef Tom Douglas with a nod to the 1990s with his aromatic steamed wild salmon served with kimchee-fried rice topped with a fried quail egg (oh, so good!) and grilled asparagus alongside. Finally, the menu’s capped off with a contribution for the 2000s from 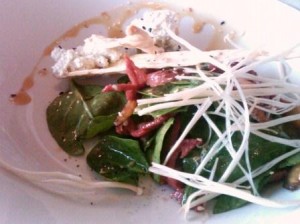 chef Jason Wilson from Crush, with a rich strip loin of beef braised and served with horseradish, roasted baby vegetables and a very indulgent porcini bone marrow puree. Lordy, what a great menu that was! And I’ve got to say, it was a pleasure to be presented a tasting menu that didn’t come with an obligatory dessert course. I’ve definitely got more of a savory tooth myself and often pass on dessert when ordering off the menu.

Though of course, there were more than a few of the restaurant’s signature dessert being served still that night. It’s one of those menu items that always brings a “wow” effect to the dining room, along with a ripple effect of folks at other tables ordering it as well after witnessing the first couple passing their table en route. One of the last columns I wrote for Seattle Magazine before leaving my post there as food editor was about making a return visit to the Space Needle for dinner after a number of years. And my lead was all about that Lunar Orbiter, the far-from-average ice cream sundae served perched over a dish with dry ice, dessert in the form of flying saucer. Always strong on nostalgia, I reminisced in that parting column about the countless visits to the Space Needle over the years, taking visiting family and friends, in celebration of a graduation or after a piano recital. 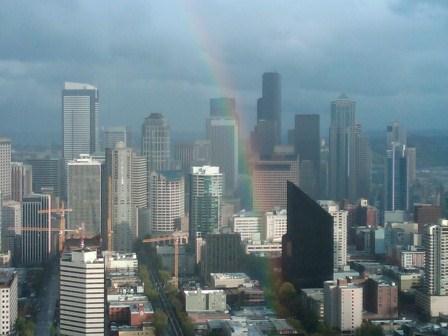 There’s no doubt the city’s changed a ton in the past five decades (of which I’ve been around for only about four and a half). And there’s been a lot of change right there at the foot of the Space Needle in recent months–most notably the opening yesterday of the new Chihuly museum at the base of the Needle. But the iconic place that structure holds on the Seattle skyline, and in the culture of this city, is steadfast. I just wonder what’s going to be on the cocktail menu at the Space Needle’s centennial! Can’t wait to find out.